ADDRESS TO THE YORUBA ELDERS ON IMO TARA ENI (SELF-CONSCIOUSNESS)

by My Woven Words
in Woven Culture, Woven History
Reading Time: 3 mins read
A A
0

ADDRESS TO THE YORUBA ELDERS

Keynote Address presented to the delegates of the Yoruba Nation, conveyed by Erelú Túnwàṣe 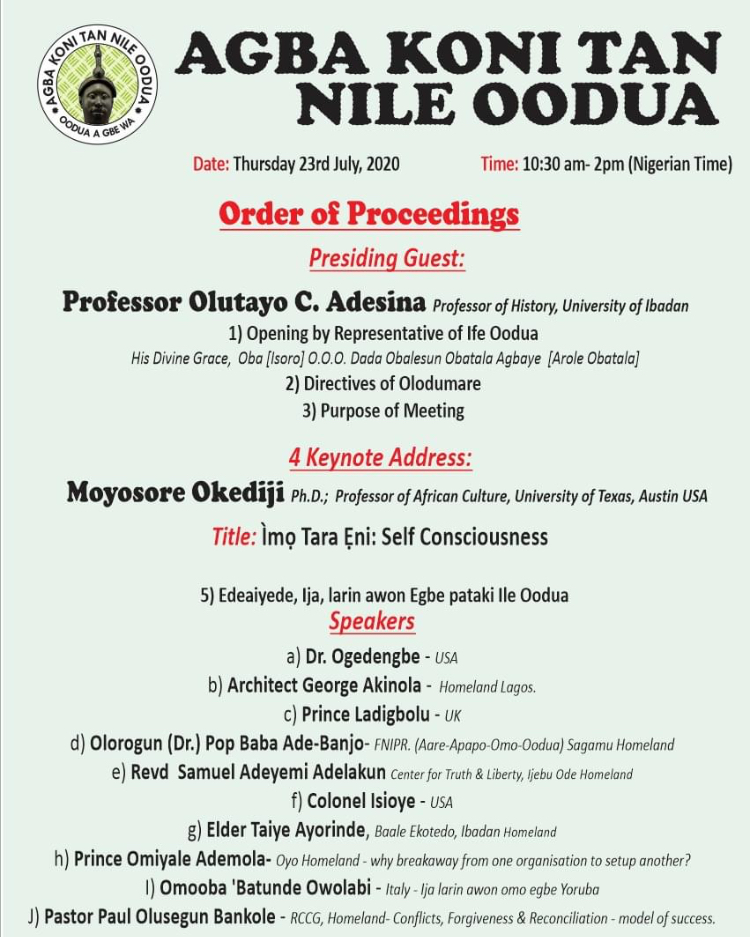 I commend Erelu Tunwase for organizing this important forum to discuss our problems and prospects as Yoruba people.

Today I want to start this short talk with an assertive proclamation:

We the Yoruba people demand total liberation from colonization.

We are an occupied people.

Yorubaland which flows with milk and honey is under military and political occupation.

We must liberate the land from its systematic and strategic occupation.

Yorubaland is still a colony under the remote control of foreign interests manipulating local and well-rewarded political conspirators.

For there to be true independence the colonial states all over Africa must be absolutely dismantled.

No people can be truly independent as long as they remain within the colonial boundaries that their colonizers imposed on them.

It is the ultimate manifestation of colonial mentality for the Yoruba nation to continue to exist in a fanciful cage that our colonial conquerors designed to imprison us.

If we fail in my own life-time to accomplish an independent Yoruba nation my children and the children of my children, and the Yoruba diasporas all over the world/will one day achieve their homeland where they will speak their own language and choose their own leaders and live on their own terms forever and ever.

I am here today to pay homage to a new baby that was just born.

Her name is the Oduduwa Republic.

Most people do not know that she is already born and that she lives in our hearts.

They ask, “Where is the Oduduwa Republic that they speak of?

Is she merely a dream?

Is she still in the womb?

Or, is she just being born?

She is born already.

But, like the infant Jesus, this baby is being hidden from the King, and all those threatened by the luminosity of her existence.

Those who threaten this new baby understand that once she grows up even the sky will not be our limit because we have brilliant scholars and imaginative artists.

We have talented scientists, writers and technologists.

We have computer wizards, surgeons, physicians, pharmacists, and engineers.

We have musicians, philosophers, and linguists, among many other professionals who are ready, able and willing to carry the flag of the Oduduwa Republic and plant it on the moon and even fly it to planet Mars and to Jupiter and to the outermost parts of the universe, far beyond the solar system.

As long as there is a single Yoruba person alive, we will be valiant.

When Nigeria was created the colonizers’ purpose was that the possibilities of having a Yoruba country were over. 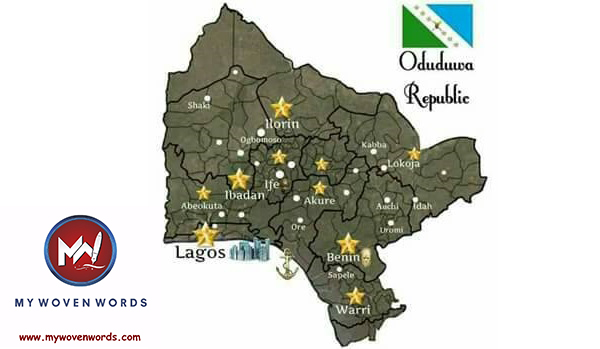 Compare the Yoruba nation to the nation of Israel.

First, the Jews were held in exile in Egypt, under the yoke of King Pharaoh.

They suffered for several generations and were used and brutalized like slaves.

But, finally, they escaped. And they built their promised land.

But, their promised land was conquered and colonized by the Babylonians.

For many years they were abused and brutalized by the Babylonians.

They were exiled and banished to the diasporas and foreigners occupied their homeland by force.

For more than two thousand years it appeared that the Jews were hopeless and irredeemably lost.

But when the Second World War ended in 1945 the nation of Israel was created as a homeland for the Jewish people.

Finally, they have a nation even-after their language had almost totally gone into extinction.

How does this story relate to us the Yoruba people?

Our ancestors gave us the Ifá technology, which informs us that the world began in Ile Ife.

And that civilization has spread from that centre to the rest of the world.

Ifá tells us, that we have been in existence for uncountable thousands of years as independent people, with our traditions, inventions, arts, sciences and technologies.

Ifa tells us that we are resourceful people who have built great cities and developed rich philosophical foundations.

Ifa preserves for us our òwe, ìtàn, ọnà and àṣà as the powerful tool for navigating the world.

Ifa tells us that our ancestors descended from Ọ̀run.

Our colonizers called it heaven.

The translation of Ọ̀run to heaven is a colonial confusion.

Ifa tells us that Ọ̀run is related to orírun, or orísun—where all things spring from.

Ifa tells us that Ọ̀run is the home from which all things have emerged.

Ifa tells us that Ọ̀run is where we are from and it is the place to which we will return when our journey here in Ayé is over.

We Yoruba people are Ọmọ Ènìyàn.

Ọmọ is related to mọ—which means to shape, or to mould, or to create.

Ènìyàn means ẹni tí ó lè yàn, a person who is created to have a choice.

We as Yoruba people had a choice to create our language, our spirituality, and our ways of life.

We had a choice to choose our leaders and to determine where we lived and what we did.

But as a people we the Yoruba nation lost our freedom toward the end of the nineteenth century when we came under the brutal colonization of the British Empire, that seized our land from us, and placed us under bondage within the colonial definition they named Nigeria.

We have, since that time, remained in this unimaginable colonial bondage.

In 1960 they gave us what they called independence.

But they did not give us back our land and our freedom.

This brings us to the closing part of this talk—and to the title of this discussion: “Imo tara eni.”

I intentionally and purposely translated it as Self-Consciousness.

We as Yoruba people must cultivate a measure of Creative Selfishness, to free ourselves from the claws of the colonial trap that Britain set for us when they created Nigeria.

Britain did not invite any Yoruba person to the table before they decided to create Nigeria.

We must ask the question: as ọmọ ènìyàn, as people created by Olodumare to have a choice—what choices did Britain give us when they created Nigeria and trapped us inside it?

Nigeria is a colonial identity, and cannot be anything more than that.

As long as the Yoruba people remain in Nigeria we are not independent.

For us to be truly independent, we must be free as a nation, to be ọmọ ènìyàn—people created to have a choice—people who are free to be able to yàn or choose our own preferences.

We must, therefore, be strategically selfish about this matter of our freedom to choose our destiny, and manifest our fortunes.

Are we being strategically selfish when we fight among ourselves for leadership?

Are we being strategically selfish when do not speak with just one voice?

Are we being strategically selfish when we grab and grab/ and grab everything and leave nothing for our brothers and sisters or for our sons and daughters?

The answer is No.

To be strategically selfish we must fully determine what is actually in our best interest.

In-fighting is not in our best interest.

The lack of one voice is not in our best interest.

Divisiveness is not in our best interest.

We have to come together and with one voice, negotiate and proclaim that: We Yoruba folks all over the world

Oppressed we are, we cannot breathe

Way down to Ile Ife