by Johnson Okunade
in Woven Culture
Reading Time: 3 mins read
A A
5

In the second year (200 Level) of my undergraduate days, there was Engr. Dr Alamu, the lecturer taking Logic Gates (CIT 219) at Alma Rohm every Wednesday morning. In one of his classes, he said the whole programming concept in computer science is similar to Ifa. He said the whole concept of programming was invented based on Ifa Corpus.

He was the strictest lecturer in our department as at that time so when he said those words I even hated him more. In my mind I was thinking the statement is a good explanation of his wickedness, maybe he is a ritualist; I used to think anything related to Ifa is evil.

But now, I understand what he was saying. Engr. Dr Alamu was right! 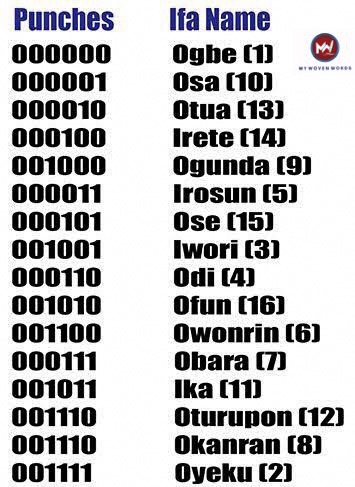 Incantation (computer codes) can animate the entities in the computer/system and make them become whatever we want: A Signature Verification System, Traffic Controller Systems, Computer Games, and any computer/mobile application you can think of.

Most people just assume that Babalawos invoke evil spirit to make divinations (kudos to Yorùbá actors that keeps confusing people by looking into black pots or looking into some clothes on the wall for the cause of a problem), what they don’t know is that Babalawos rely on “Ifa dida” before addressing issues brought to them.

After the “Ifa dida” the result they get from the opele which is similar to logic is then used to predict.

When a Babaláwo cast opele (ifa dida) to make divinations the half-nuts of the opele will divide side by side into two rows, four on each side. If the half-nut opens, it’s the same as “1” if it closes, “0”.

The result of the opele is what determines the odu ifa the Babalawo will recite and use in making his predictions.

That is binary or logic; the only language Computer understands.

According to the former vice-chancellor of Obafemi Awolowo University (OAU), Prof Wande Abimbola:

Ifa is one of the orisa (divinity) of Yoruba people. It started in Ile-Ife since the beginning of the Yoruba race. We know of Obatala, Ogun, Oya, Osun and so on. Ifa is one of them but it is different because it has more extensive literature than any other divinity. All the chants of Ogun can be rendered in two volumes; like the size of a Bible.

That will fill the size of a large library. There is no other literature in the world that has such a volume. Ifa is the greatest heritage of Africa. It talks about everything. It is our own encyclopaedia which is held orally. It is a testimony to the fact that the human brain can retain a lot of information without having to write anything.

When Orunmila or Ifa was alive, he had two eyes in the front and two at the back. A Babalawo will cast and see everything that will happen to the client. It is completely scientific.

It is different from being possessed by orisas like a Sango or Osun priest. After feeding and dancing to those orisa, they can possess you and you will start saying what they ask you to say. Babalawo does not function like that. He uses verses of the odu that he casts.

Ifa is the greatest African gift to the whole world. Unfortunately, while Ifa has travelled all over the world, Yoruba people, who are the real owners are ignorant about it because somebody changed our minds. There are white people who are now Babalawo and some of them have private jets from the practice.

We Africans believe everything from our culture is evil and unprogressive. This society condemns our indigenous culture and exalts foreign culture.  Babalawos are portrayed as evil most especially in our movies.

Yes, I believe there should be reorientation and some evil traditions should be jettisoned but that doesn’t mean the totality of the Yorùbá culture is evil.

The Bible has Old and New Testament for a reason, we can also decide to focus on the positive and progressive sides of our culture, I believe it’ll go a long way in propelling us towards the greatness we crave in Africa, and in truth the greatness we deserve.

Thanks so much for your time.
Please drop your opinion in the comment session below.

Written by Johnson Adé OKÙNADÉ, an enthusiast of Indigenous Culture