THE INVITATION OF ALIMI AND HIS “JAMA” TO ILORIN BY AFONJA

THE INVITATION OF ALIMI AND HIS “JAMA” TO ILORIN BY AFONJA

In place of the dead Aláàfin Aole Arogangan, Aláàfin Adebo was placed on the throne with the nominal title of Aláàfin of Oyo, but without the authority and power of a King.

It was his misfortune to have come to the throne at such a time, and he held the scepter for only 130 days.

Kakanfo Afonja of Ilorin and Opele the Baale of Gbogun were the first to proclaim their independence, other chiefs soon followed their examples. This was the commencement of the break-up of the unity of the Yoruba kingdom, and the beginning of the tribal independence.

Tribute was no longer paid to the Aláàfin. The King’s messengers and Ilaris no longer carried that dread as before, nor were they allowed to oppress people or enrich themselves with their goods as before.

As the Aláàfin’s authority waned, so also the respect and deference hitherto paid to the citizens of the capital ceased; they were even treated disrespectfully and became the subjects of vulgar songs all over the country, a thing unheard of before!

Law and order were subverted, might triumphed over right, and the powerful chieftains turned their arms towards subverting town after town in the kingdom in order to increase their own wealth and power.

Opele was the only powerful chief Afonja respected and having now no rival he resolved upon a scheme to reduce the provinces under his own sway, leaving the capital severely alone in complete isolation.

Afonja made no attempt on Oyo-Ile, had no aspiration after the throne knowing that was impossible of attainment; it was sufficient tor him that the King was powerless to check his ambition.

In order to strengthen his hands in the enterprise he was about to undertake, he invited a Fulani Moslem Priest named Alimi to Ilorin to act as his priest. Alimi in responding to his call came with his Fulani slaves and made Ilorin his home.

These Fulani slaves Afonja found to be useful as soldiers. He also invited to Ilorin a rich and powerful Yoruba friend at Kurwo named Solagberu, who quartered himself at the outskirts of the town.

All the Fulani and even Hausa people in the nearby towns hitherto employed as barbers, rope-makers, and cowherds, now deserted their work and flocked to Ilorin under the standard of Afonja the Kakanfo, and were protected against their masters. 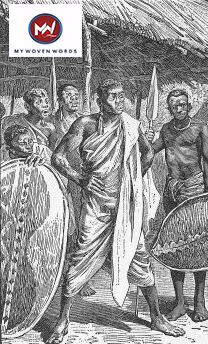 Under Solagberu’s standard also flocked Mohammedans from Gbanda, Kobayi, Agoho, Kuwo, and Kobe. All in his quarter being Muslims, he named that part of the town Oke Suna, i.e., the quarter of the faithful.

They held themselves separate not only from the pagans, but also from the Fulahs or Fulanis their co-religionists. From this time began the Jihad or religious war in the Yoruba country.

Those who were enlisted as soldiers called themselves Jama (a Hausa word for the rank and file, as distinguished from the leaders).

The mark of distinction between themselves and others was the Kende, two large iron rings one on the thumb, the other on the 3rd or 4th finger of the left hand; with this they welcome each other, striking the rings against each other to produce a sound. This is the sign of brotherhood; hence they often say
‘O re kende si mi, okan na ni wa,” (he welcomed me with the Kende, we both are one).

The operations of Alimi and his Jamas were later directed against the Igbona tribe. Very few towns of Yoruba proper destroyed were Ibolos, Ejigbo, and Ilobu amongst others. The reason why these towns were destroyed you shall notice in our subsequent published historical write-up.

After the fall of Opele of Gbogun, Aláàfin Adebo declared war against the town of Gbogun, but he died at home during the progress of the siege. His reign was short and specially marked by troubles. The people of Oyo now longed for peace, hence this song :—

(With deliberation, and thought we made Adebo King,
O Abiodun, do thou return to reign !)