MyWovenWords » OIL PRICES VS THE NIGERIAN ECONOMY – BY OLADELE ABIGAIL

OIL PRICES VS THE NIGERIAN ECONOMY – BY OLADELE ABIGAIL

OIL PRICES VS THE NIGERIAN ECONOMY 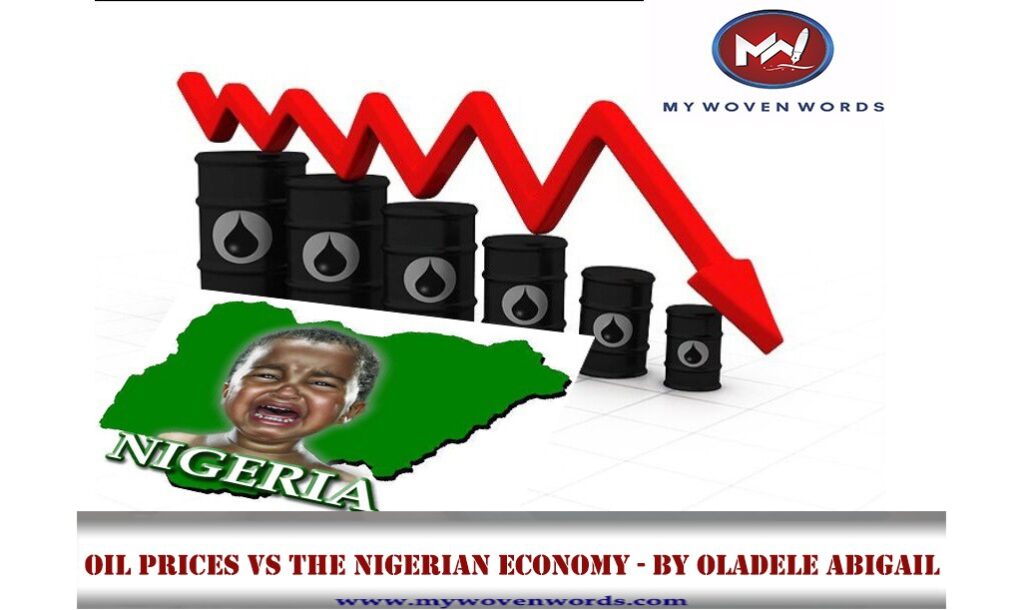 Nigeria, a member of the Organization of the Petroleum Exporting Countries (OECD) discovered oil in Nigeria in 1956 at Oloibiri in the Niger Delta. Before the discovery of oil, the agricultural sector played a dominant role in Nigeria’s economy as it accounted for about half of the country’s Gross Domestic Product (GDP). The petroleum industry began operations after independence and since then, the country depends heavily on the sale of oil as its major source of foreign exchange.

Oil is a very essential commodity that is used all over the world. Most countries however do not have the crude oil resource and hence, international trade comes to play. Nigeria is therefore, susceptible to the movement of oil prices in the international oil market. Just like every commodity, Oil has its cycle with periods of high and low demand, periods of oversupply and periods of declined supply. This in turn will affect price and in worse scenario, there could be a global crash in oil price. 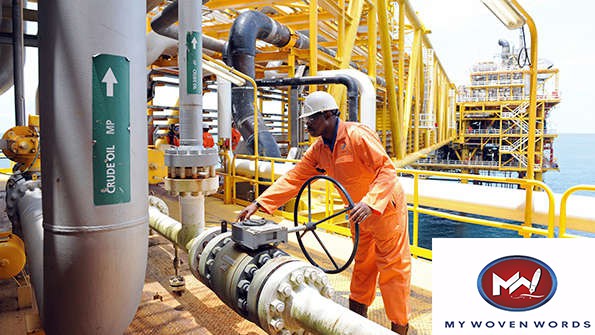 Oil prices were relatively stable before 1973 when an embargo was placed on perceived nations who are supporting Israel’s war. With this, oil prices rose from US$3 to about US$12. In 1979, oil prices too increased due to the Iran revolution which caused a decline in supply. An oil glut also came about in the 1980’s which was caused by decline in oil consumption amidst surplus crude oil. The financial crisis in 2008 that caused recession led to a decline in the demand of oil, it was also said that unfavourable geographical events and natural disasters added to the decline but it was for a short term. A supply glut was also noticed in 2016 and in April 2020, oil prices dropped by 80% down
to about $5 and even traded at a loss.

The recent crash in oil price is of a great interest, not only because it affects income of countries but because the crash was awarded the first crash that led to the trading of oil at a negative price. The crash was caused as a result of oil glut which is attributed to the COVID-19 pandemic and the oil price war between Russia and Saudi Arabia.

A similar pandemic to the corona virus known as the Spanish flu which rampaged from periods Jan 1918 to Dec 1920 could be of interest to us. Being a similar pandemic, it was not recorded that there was a global oil crash. However, the swine flu pandemic in 2009 pushed down oil prices in some countries like the US, Mexico but this was for a short period. With the two cases, we could pose a question that has the corona virus pandemic contributed to the price crash of oil and if so, to what extent? How significant is its impact? 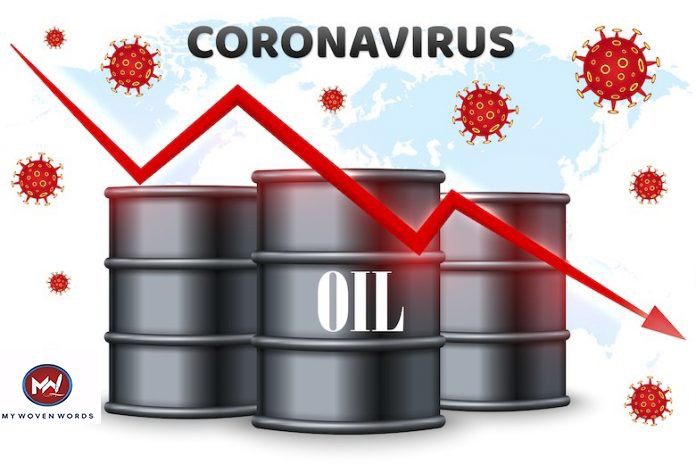 Just like every other commodity in the market, the forces of demand and supply helps to determine the price of the commodity. Oil prices are influenced by the law of demand and supply. Due to the Covid-19 pandemic, there have been a reduced economic activity in the nation which has pushed down oil prices. Policies like the stay at home order has reduced travelling and production and in turn affects the consumption of oil; this is the demand perspective.

With a constant supply of oil and a low demand, the storage capacity of oil producing nations were running out as there was excess supply. The law of demand and supply came to play immediately, with an increased supply and a decreased demand, oil prices had to decline. The decreased demand is attributed to the economic and financial stress the Covid-19 caused and its impact is quite significant (using apriori expectation).

It was also recorded that the oil price war between two of the world’s largest oil producers; Russia and Saudi Arabia has an impact in the crash in oil market. China being the highest importer of oil reduced its oil consumption due to the outbreak of the corona virus. Following the declining demand, the Organization of the Petroleum Exporting Countries (OPEC) had a meeting on how to maintain prices. It was agreed to cut their oil production by 1 million barrels per day.

Russia, who is not a member of the organization agreed to cut its production by 500,000bpd. With a reduction in supply coupled with the existing decline in demand, oil prices will fall back to equilibrium. Russia however increased its production, the reason is yet to be known and as a tale of revenge, Saudi Arabia responded to Russia by cutting its export prices and increasing production which led to a big drop in oil prices.

The Nigeria economy depends heavily on the sale of oil as its major source of foreign exchange and with the crash in oil prices, it could threaten Nigeria economic stability. Nigerians are actually smiling with the reduction of pump price of fuel. The reduction in pump prices will only follow the circular flow of income theory as income is now shifted from the producers (in the oil sector) to the consumers and back to the producers (of another sector) as the discounted amount will be spent on other sectors of the economy.

The Nigeria economy is not smiling as Foreign reserves declined from $45 billion in June 2019 to $36.2 billion in March 2020. Also, the likelihood for aggregate expenditure to fall is high with evidence from the National Assembly proposing a review of the 2020 Budget. It may also be difficult to service debt with the reduced income and in the long run, public sector worker’s employment could shake. With a decline in foreign reserves and the likelihood of the country’s ability to service its debt could lead to a decline in the nation’s credit rating by credit rating agencies

The sustainability of the growth of any economy depends largely on the diversification of such economy because as one sector of the economy is threatened, another sector emerges and cover up the weakened sector. Nigeria government and the policy makers are quite aware of the negative impact of depending on just one source of income as a country.

Over the years, the government have tried to diversify by providing loans to agricultural sector so as to boast its production. The manufacturing sector also have been strengthened to an extent, however, the country still depends largely on income from the oil sector. We hope that this present day trouble the economy is facing will help the policy makers see a need to diversify the economy and increase its efforts to do that.

Oladele Abigail, an economics graduate of Bowen University who applies her passion for writing to her career path.

Please drop your opinion in the comment box below, It really matters.

Digital Currency (Bitcoins) And The Future Of Naira

BOLA AHMED ADEKUNLE TINUBU: THE FALL OF AN EMPEROR AT LEKKI TOLL GATE

THE ECONOMICS BEHIND BIG BROTHER NIGERIA – BY OLADELE ABIGAIL

NAIJA @ 60: THE JOURNEY SO FAR – WRITTEN BY DANIEL OBI