Did you know that the concept of Yoruba Nollywood movies showing that Babalawo foresee through walls, clothes or even pot is wrong?

Read through to know the truth.

It is rare to watch Yoruba movies especially village movies and not see a Babalawo. Ifa is an integral part of Yoruba culture, hence movies about Yoruba culture, traditions and norms could barely survive without featuring a Babalawo (Ifa priest).

But how are they portrayed? In the right way or the wrong one. I have seen several Yoruba movies and when they show a Babalawo (Ifa priest), they mostly don’t show them casting Ifa divination and when they do, they just jump into viewing what they foresee through clothes or through the wall. This concept is actually wrong. 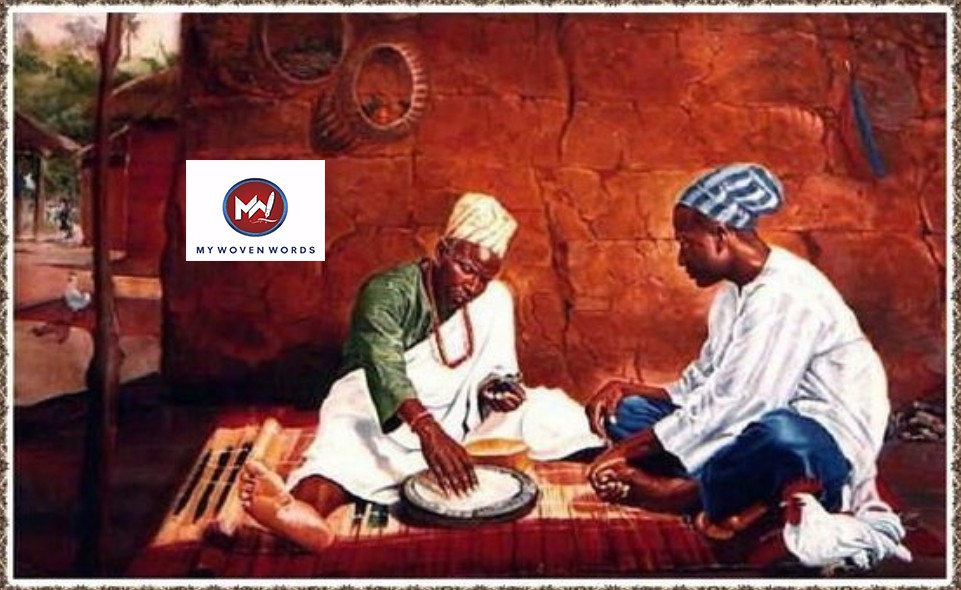 Also, a lack of understanding of how they truly foresee has demonized Ifa reading as a form of mysteries or metaphysical power. This is in accordance with a saying which says: “People hate what they don’t understand “.

To explain further, it is necessary you know that even though Ifa divination system employs spiritual mediumship, it does not rely on a person having oracular powers instead it works on a system of signs that are interpreted by the Ifa priest or Babalawo (the diviner).

How do Babalawo then foresee?

Understanding of Ifa is very important, for a Babalawo to be competent and certified, he must have acquired a certain volume of knowledge of Ifa. Ifa’s knowledge is inexhaustible, limitless or never-ending, call it whatever you want, so you only need a certain degree to be competent.

However, during divination, an odu Ifa is revealed for the person(s) the Babalawo is consulting for and this would just be one out of the two hundred and fifty-six (256) corpus of Ifa present. In each odu (corpus), there are about 256 verses(Ęsè Ifá) full of messages.

It is from these verses that Babalawo derive their information from. These ęsè Ifà are the most important part of Ifa divination as they are the ones that contain Ifa messages. They are chanted by the priests in poetic language and they reflect Yoruba beliefs, history, medicines, philosophy, mythology, cosmology, cosmovision, language and contemporary social issues. Mostly, a verse contains three parts and all the parts are written in stanza:

This is the first few stanzas of Ifa verses before the Adifafun (that is who the Ifa was casted for).

It can contain information in a direct form or in-form of a proverb that still need to be explained.

If it doesn’t have any message, it would be the name of an ancient Babalawo who made the first divination.

This part contains the person the Ifa was first divined for, his/her/its problem(s) (Ifa sometimes talk mythologically about non-living things hence, it) and the solution that was applied to that problem.

Concerning the name, the real name of the first person the Ifa was consulted for might not be used, sometimes areas of concentration might replace this such as “adífáfún Ęni ti mowú tíse omo bíbí inú àgbonnìrègún” which means casted divination for he who wants me.

You will see that this is not really a name but rather an area of concentration. For the solution part, Ifa doesn’t see a problem without providing a solution to it hence the proverb ” akìíbá ìrújú lo sí ilé Babaláwo, kábá ìrújú bò ( we don’t meet Babalawo with a confused mind and return with such).

This is the concluding part of all Ifa verses, it always indicates if the person did the sacrifice, followed the advise, did the needful or even achieve his or her aim. It is also a crucial part of the verse because it contains the lesson learned from the verse.

Most of the time, the three parts will contain messages, and sometimes only two or even one will contain the message.

For example: from the corpus of IROSUN OGBE Ifa says:-

Òrò rę tó báyìí,
Your matter is as bad as this,

Òrò rę tó báyìí,
Your issue is a bad as this,

Òrò rę tó báyìí,
Your matter is as serious as this,

Adífáfún Enití ayé yí o mon bùkù,
Cast divination for he who is belittled by the world,

Ebo wóníkí ó mon se,
He was advised to make a sacrifice,

Eni tí Orí dá kòse fi arawé,
Never compare yourself to him who is specially made,

Eni tí Olórun dá kòse bùkù,
He who is created by the creator can not be belittled.

Even without explaining, you can easily derive all the IFA messages from this verse even from all the parts but i will explain for better understanding:

Says, this person’s relatives have no concern about him or her even though they have all the resources to lift him but they won’t. He shouldn’t take them as enemies but should know that his or her goodness is not coming from them.

At the last stanza, Ifa is saying any time he or she tells his/her relatives his problems, they will only show concern while he is there but they will start making jest of him once he leaves.

This means, he has been belittled by many but he or she should remain focus after doing the needful sacrifice (a form of prayer to Olodumare), Olodumare will bless him or her abundantly.

He will have to appease his head, buy something edible and also tangible for his mother and father, make offerings to Ifa and also help the needy as a message to Olodumare.

As said earlier, there is still possible of getting message only from the two or one parts of Ifa corpus.

From the corpus of Ika Oyeku which says:

From this, you will see that part A is just a name of the Babalawo and that stanza is only acknowledging him and this brings a direct message to us.

But part B is talking about a clan, a family, a community that untimely death is rampant there, they are then advised to make ebo.

And to conclude this, part C now tell us what they did to avert that death which is sacrifice. After this, the person would be given the prescribed sacrifice to do.

How then do this message match the person we are divining for? Am sure this question would be on your mind now or have crossed it. Ifa being a voice of Olodumare and Orunmila being the witness of destiny (Ęlęri Ìpín) both have access to every messages and information about each and every one of us without discriminating about race or tribe.

The purpose of divination (systematic collection of the divine message and its processing and interpretation) is to access the esoteric information. The esoteric information is accessed when a divine connection is derived between your Eleda (head spirit), soul and Orunmila, the power derived from this connection will determine the Odu (ese ifa or Ifa verse) that would be picked.

Every information in this verse will be related to your present, past and future. Even though you need the power of your mind and also your thinking faculty to understand the message, they have nothing to do with the message.

For example, you thinking about yes to a question doesn’t mean you will get yes from Ifa and even if you eventually get yes, there will be a backup message telling you why yes is chosen.

In conclusion, the interpretation of Ifa priest by Yoruba Nollywood through their movies is wrong as it is not dogmatic, mysterious or sibylline or even as vague as claimed hence accessing Ifa information doesn’t require oracular powers, it only involves the acquisition of knowledge of Ifa.