OLOFIN ROCK: LEGENDS OF THE POWERFUL OLOFIN DIETY IN LANLATE

Olofin rock in Lanlate, Oyo state Nigeria is a sacred and loosely packed pile of rock that remains attached as if cemented together for centuries. The story behind how the rock came into being is intriguing and fascinating.

Olofin is a god that aborigines believe in and worship. Olofin is believed to be a very tall figure and white in colour. He used to stand tall among trees and mountains waiting for enemies to attack. Olofin’s physique is believed to be very scary, conveniently scaring invading warriors away. 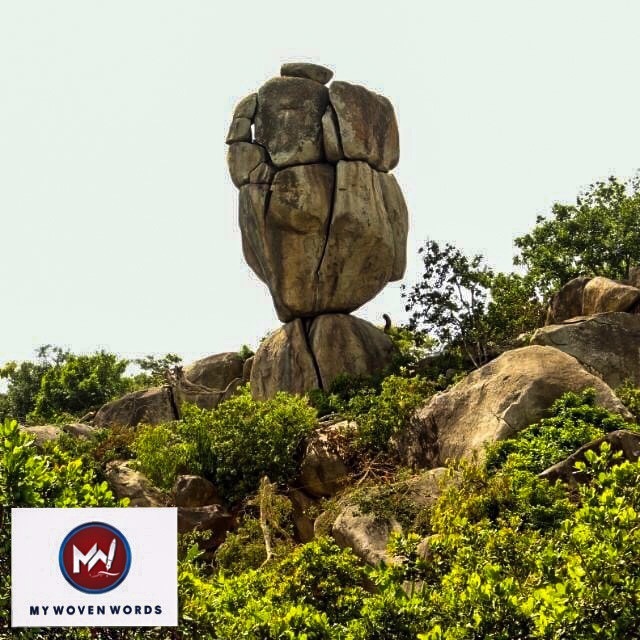 Yet for those warriors bold enough to face the deity, Olofin used to swing low with full force in all directions, swirling around like whirlwind on the invaders and destroying them with full force.

Onifade, a boy of about 12-years of age was my tour guide to Olofin rock. He told me scary stories of how the rock can stand and start walking like a human, putting people in disorderly haste. He also told me of how the forest behind the Olofin lake leads to “Isalu Orun” (heaven) and anyone that dares go to the back of Olofin lake will meet himself/herself in heaven; disappearing from this world completely. I must confess that he succeeded in scaring me; because I was over-cautious beside Olofin lake.

Mythical sites like Olofin rock and Olofin lake usually have different mysteries surrounding them. In Africa, we don’t really archive the original history and this leads to “a-sort-of-superfluous” and exaggerated version of the real account of a historical record. We rely more on oral accounts as passed down from one generation to another which is mostly altered, polluted and inaccurate.

Here on My Woven Words; don’t forget we only write what is right. Our “Woven Culture/History” must be based on facts and not fables made up to scare children to good conduct. After hearing all the scary stories the little Onifade told me as he was made to believe by friends and older people without adequate knowledge of Olofin rock and lake, I took a step further by meeting with the custodians of Olofin.

I was chanced to meet Chief Ayantade Ayandokun Moses; the Alagasa of Agasa land. Agasa family is the custodian of Olofin, many believe they are the direct descendant of Olofin deity.
Alagasa means Oni-Agasa (Owner of Agasa).

Chief Ayantade Ayandokun Moses claimed that the rocks now seen as Olofin was “eru ti won di sinu igba” (loads packed in calabashes) but those loads transformed to rocks seen today. He continued by saying the rock is just a symbol and Olofin is a deity that resides in a shrine close to the location of Olofin rock.

Just like most of the deities in Yoruba history, Olofin was once living among men. He had two wives usually referred to as “Iyale” and “Iyawo” (the first and second wife) in Yoruba cultural setting. The First wife; Iyale was very submissive, understanding, loving, accommodating, content, calm and easy-going while the second wife; Iyawo was opposite in character when compared with the first wife; Iyale.

So one day, they were supposed to travel, each of the wives packed their loads (note that in those days they used Calabash of different sizes to pack their loads unlike this generation of boxes and bags).

After they packed and were ready to set out with there powerful husband; Olofin, the second wife started nagging, complaining and fighting with the husband. Just like most powerful leaders and deities, Olofin was also a “Choleric-temperamental” and hot-tempered god that used to get infuriated easily.

The second wife; Iyawo made him lose his temper and out of “steaming anger” of a powerful and supernatural deity, Olofin kicked the wife and all the loads the “Iyawo” packed in calabash with his supernatural leg.

On the other hand, the calm and submissive first wife; “Iyale” and all her packed calabash also mysteriously transformed to a sacred and loosely packed pile of rock that remains attached as if cemented together for centuries, despite all the efforts of man to decipher what’s holding it together or comprehend how loosely packed piles of rocks can stand tall for ages; no one can fantom how it’s even possible.
I guess Olofin rock will forever be a mystery.

The rock is just a symbol. Olofin is a god that aborigines believe in and worship.

An Orisha (spelt òrìṣà in the Yoruba language, orichá or orixá in Latin America) is a deity that reflects one of the manifestations of the Supreme Divinity (Eledumare, Olorun, Olofi) in Yoruba religion. Orisha is said to have existed in the invisible world (òrun) and lived as humans beings in the planetary world (ayé). Others are said to be humans who are recognised as deities due to extraordinary feats. Many Orishas have found their way to most of the New World as a result of the Atlantic slave trade and are now expressed in practices as varied as Santería, Candomblé, Trinidad Orisha, Umbanda, and Oyotunji, among others.

Unlike this era, each town is always besieged with wars and powerful warriors, striving to make a name for themselves, demonstrate how powerful they are and forcing different towns to accept them as there liege Lord and superior.

In those days, each settlement usually relies on a powerful deity that serves as a protector against invaders into there settlement. Yorubas are believed to have different and countless deity they worship and offer sacrifices to and in return, they rely on the deity for guidance and protection.

Such was the case of the inhabitants of Lanlate and even the neighbouring towns. Olofin was the supernatural supreme being they looked up to protection and guidance.

Olofin Deity is believed to be a very tall figure and white in colour. The deity used to stand tall among trees and mountains waiting for enemies to attack. Olofin’s appearance used to scare invading warriors away.

Yet for those warriors bold enough to face the deity, Olofin used to swing low with full force in all directions, swirling around like whirlwind on the invaders and destroying them with full force.

Asides conquering invading enemies, Olofin deity is believed to be a merciful god. Barren devotees approach the deity to give them children. They perform different rites and after they give birth as given by the deity, they must go back to the shrine for thanksgiving. One of the things they must use to appreciate the deity is snails, prepared in white egusi soup; the egusi soup must have no pepper, salts or palm-oil. Devotees would eat the snailed egusi soup at the shrine.

Olofin had a powerful friend; Ikona who also transformed into a big stone. Olofin and Ikona were very close and they used to eat together. The remnants of the snailed egusi soup must then be poured on the big stone which is believed to be Ikona, Olofin’s bosom friend.
Meaning Olofin ate to satisfaction and even went ahead to give his friend (O je o yo, o tun lo fun ore re je)

This demonstrates the fact that Olofin is not selfish. As a deity, it’s believed that he detests selfishness.

Olofin shrine is close to the site of Olofin rock. However, only a few devotees and family of Alagasa are allowed to really visit and perform rites at the shrine. The shrine remains a mystery to many as people only know it’s situated around that place but can’t really know the exact place.

I wasn’t chanced to visit Olofin shrine, but when conversing with chief Ayantade Ayandokun Moses he mentioned that the family strive to keep most of the secrets surrounding Olofin shrine because of intruders and “doubting Thomas’”.

Chief Ayantade Ayandokun Moses insisted that if I must go as a Travel/Lifestyle Blogger or tourist, he must be the one to lead me there and he would have given me several instructions a day before visiting Olofin shrine before going.

“Seeing is believing,” said Chief Ayantade Ayandokun Moses “There is no crime in observing the shrine from afar but no pictures of the shrine must be taken”.

Olofin as a deity hates salts, pepper & palm oil (Olofin ki je epo beni ki je iyo). It’s one of the taboo and anyone going near Olofin shrine must not eat pepper, salts and palm oil made food or offer it as a sacrifice to the deity.

Chief Ayantade Ayandokun Moses said the shrine where Olofin resides consists of different big pots that represent the deity. He said if they visit the shrine and eulogise Olofin, sounds come from inside the pot. Meaning the deity hears and responds to the eulogy. He said although he has never seen the god before, yet it’s a sign that the deity resides there amongst other signs.

Water is a necessity.
The Olofin lake is as old as Olofin. However, the lake got its name due to the closeness in proximity to Olofin rock and shrine.
Aborigines and devotees believe the lake is supernatural as Olofin himself was believed to use water from the lake.

When I asked Chief Ayantade Ayandokun Moses about the supposed mythical beliefs surrounding the lake, he said most of them are not true. He acknowledged the fact that closeness in proximity of the lake to Olofin rock made people believe so much in the water and just like even in Christianity; “faith, no matter how little can move mountains”.

The water looks very dirty and contaminated, yet for centuries, some people drink it like that and there has been no account of sickness as a result of drinking the water.

The Alagasa of Agasa; chief Ayantade Ayandokun Moses emphasized that our culture and history is noble and lamented that most of it are already going into extinction. Although there are some of our traditions that should be jettisoned, yet most of it has its beauty and if we can still focus on preserving some of those traditions, culture and historical knowledge, this world will be a better place.

God has blessed the Yorubas with the best and richest cultural heritage. Consider the issue of Olofin for example, God wants us to see lessons around us; things we can also look at for insight, which is why the load packed by the wife inside calabash didn’t transfer to something that can perish but rocks that’ll forever be a constant reminder to for generations to come.

Culture and traditions shouldn’t contradict Islam or Christianity. The knowledge of where we are coming from and whom we are serves as the light that guides our path.

He encouraged parents to share family history with there children. Knowledge is potential power.

Read More on my Column

Thanks for visiting My Woven Words. We are passionate about historical heritage and we are dedicated to supplying nearly extinct historical and cultural contents to the world on a platter of gold.