OBA SIR ADESOJI ADEREMI: THE OONI OF IFE THAT ALSO SERVED AS GOVERNOR OF WESTERN REGION

During the colonial era, the Oba Ooni gained a considerable amount of power due to the colonial policy of indirect rule and being labelled a first class Oba among traditional rulers in Yorubaland.

The policy of indirect rule was used to ensure native awareness and consultations about colonial policies affecting the regions. The British leaned on existing native political structures and hierarchy, particularly the Nigerian traditional rulers, for political consultation and tax collection.

Later on, the Ooni with the consent of the leading Yoruba political leaders used his position to close the gaps of exploitation of divisional differences among Yorubas and tried fervently to rally the Yoruba towards a common goal.

In 1962, the king acting as governor, used his power to remove the premier of the region, sensing the premier did not have the support of the majority members of the House of Assembly. The event escalated the political rivalries in the region.

THE BIRTH OF OBA SIR ADESOJI

He was born on the 15th of November 1889, during the turbulence of the Yoruba civil war to Prince Gbadebo of the Osinkola ruling house of Ile Ife and madam Adekunbi of Ipetumodu, Ife north local govt, in the absence of his warrior father, who was on a war expedition; he was named Adesoji Aderemi.

On Prince Gbadebo’s return, Adesoji’s older sister Ibiyemi, unable to contain her excitement of the news had to be held back from initial physical contact with her war-weary and juju laden father.

Until he had rid himself of his protective war attire by appeasing his gods, then was it safe to embrace his family. Prince Gbadebo being an Ifa priest, presented his newborn to his Ifa Oracle demanding to know what the future holds for the new baby Aderemi.

The father was told to bow to his son. The Ifa predicted that baby Aderemi, was going to wear the crown of his ancestors, that his reign will be known far and wide, and he will come in contact with strangers in far away places.

Prince Gbadebo told his wife to get coral beads to dress his son as was customary for royalty. In the belief of the oracle, mother-Adekunbi went into protective mode, always washing Aderemi in herbs, until he outgrew her methods.

Having lost his father at eight years of age, he was subsequently raised by his mother. The emergence of Christianity dissuaded his mother from the traditional family worship of Ifa, hence his enrollment at the new local Christian primary school of St Phillips, Ife, as one of the first students in Ife to attend a local school in 1901.

The young Prince Aderemi had a vision. His objection to farming with his much older and beloved brother, Papa Prince Adeyemo, led to his enrollment at the Anglican primary school at Aiyetoro, Ile-Ife.

Under the tutelage and mentorship of Revd Canon J Adejumo, aka Baba Aiyetoro, who later became his father in law. He had an affinity for the law profession and could have travelled to the United Kingdom for the law programme, with his contemporaries of the day – Bashiru August.

Not Aderemi, he had a date with destiny – the Ife Crown. Despite losing his father Prince Gbadebo so early, he kept his ambition on track, thanks to the beady eye of his mother.

OBA ADESOJI TADENIAWO ADEREMI AS THE GOVERNOR OF WESTERN REGION

Oba Aderemi was the first African Governor in the British Empire and Commonwealth. His reign as the governor of the Western Region of Nigeria was a very interesting one. 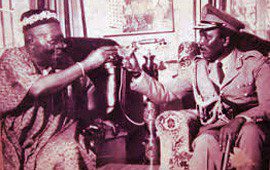 During colonial rule, the Ooni gained considerable amount of power due to the colonial policy of indirect rule and being labeled a first class Oba among traditional rulers in Yoruba land.

The policy of Indirect rule was used to ensure native awareness and consultations about colonial policies affecting the regions.

The British leaned on existing native political structures and hierarchy, particularly the traditional rulers for political consultation and tax collection.

Later on, the Ooni with the consent of the leading Yoruba political leaders used his position to close the gaps of exploitation of divisional differences among Yorubas and tried fervently to rally the Yoruba towards a common goal.

In 1962, the king acting as governor, used his power to remove the premier of the region, sensing the premier did not have the support of the majority members of the House of Assembly. The event escalated the political rivalries in the region.

Prince Aderemi’s wealth and exposure made him the clear candidate to rise to the throne of Ile-Ife.

Upon the death of Oba Ademiluyi Ajagun, his predecessor, he became the outstanding contestant for the throne.

On the 2nd of September, he became the 49th Ooni of Ife. He was widely dubbed the first literate Ooni.

Oba Aderemi quickly acclimatised himself to his new environment, at 40, he was one of the youngest of the Yoruba Obas at the time.

Oba Aderemi with the aid of the traditional Ife elders, (Obalufe, Obajio, Obaloran, Wasin, Obalaye, Akogun, Jagunosin, Ejesi), formed the administrative set up that transformed the ancient town in the next decade.

Oba Aderemi championed Education during his reign as Ooni, which was the sentiment behind the foundation of Oduduwa College in January 1932.

Oba Aderemi personally funded the construction of the Secondary School, a model institution at the time; Oba Aderemi believed that the surest way to facilitate and sustain modernisation is through education.

A great landmark of his reign pertaining education was the foundation of the University of Ife, which many attributed to Oba Aderemi’s influence in the ruling Government, with the Ooni tenaciously proposing Ife as the ideal location for the foremost institution to be situated.

Oba Aderemi constructed the main building of his palace, which remains a mainstay of the Ife palace to date – with its unique colonial-style. Ooni Aderemi served as the permanent chairman of the council of Obas from 1966-1980.

In June 1948, after responding to a request form some Yoruba students abroad for the establishment of an Egbe Omo Oduduwa in Nigeria, the Egbe or group was formally inaugurated in Ife.

The group was created to unite the disparate sub-ethnic Yoruba groups. Aderemi also found himself in the midst of a disagreement between the people of Ife and Modakeke.

The disagreement arose when a Modakeke progressive union began to protest unfair charges by land owners from Ife.

After some disturbances, the case was transfered to the courts but the then highest court of appeal ruled against Modakeke. However, a rival group, the Egbe Omo Ibile Ife also arose causing disturbances in the town.

His reign as Ooni was remarkably peaceful, with his innovative ideas in business creating a pathway to wealth for a lot of indigenes, especially in the agriculture industry, where he was a business leader himself.

Ooni Aderemi was a core protagonist of the Yoruba renaissance and a hero of the Nigerian nationalism.

Below are some of the positions and responsibilities he assumed between 1930 and 1980. 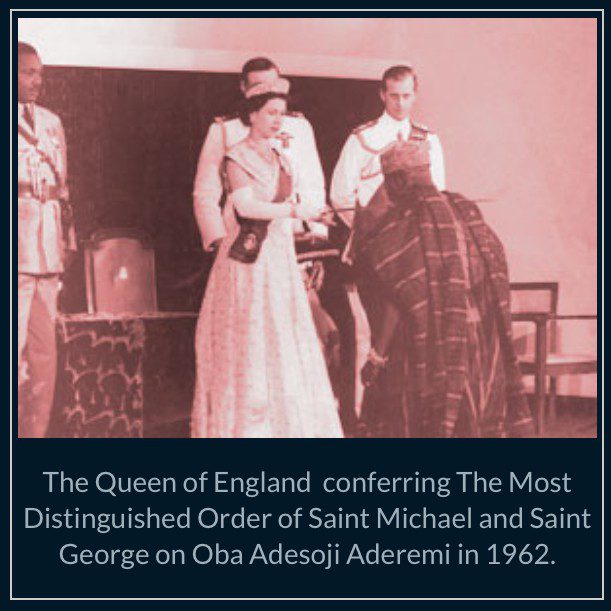 It’s astonishing how he managed to keep his large home of a harem of 13 wives, 63 children and numerous related dependents on one hand, the institution of the seat of Oduduwa which is the most revered position in Yoruba land for fifty glorious years that could be said to be the apogee of development of Ife land.

More intriguing was his ability to be a friend of the colonial masters, represent them on a side and on another hand be at the fore-front of nationalism and leading other active politicians without losing focus or losing dignity.

Ooni Aderemi was on the star list of the fifty eminent Nigerians that were honored at the fiftieth Independence anniversary of Nigeria in October 2010.

Consummate politician, astute businessman, a diplomat second to none, a natural ruler, who knew instinctively, that power hinges on the strength of a monarchy being able to reinvent and evolve itself, so as to keep moving into the future.

He was ahead of his time. He built his today, with his tomorrow in focus.

Oba Adesoji Aderemi was a traditional ruler, the spiritual head of the YORUBA people and a public figure, having been the Sole Administrator of the IFE NATIVE AUTHORITY during colonial rule, a minister in the first central government of Nigeria constituted in 1951, member of all the constitutional conferences leading to Nigeria’s independence and the first black governor in the English commonwealth upon his installation as the governor of the Western Region of Nigeria in 1960.

He had many firsts, which included being the first indigenous governor in black Africa and the British Commonwealth, (before Nigerian independence in October of 1960) whilst still holding down his spiritual job, as the Ooni of Ife and running successful produce, commodities trading, mining and transport businesses.

He eventually joined his ancestors on 3rd July 1980, after 50 glorious years on the throne of ile-ife, the cradle of Yoruba culture and civilization.

opps, sorry I meant to say the cradle of humanity.

“The labour of our heroes past shall never be in vain.”

For permission requests, contact the admin on [email protected], or WhatsApp/Text him on 07036065752