MyWovenWords » THE WORKSHOP OF THE MIND

THE WORKSHOP OF THE MIND

by Johnson Okunade
in Woven Motivations
Reading Time: 10 mins read
A A
1

THE WORKSHOP OF THE MIND

The imagination is literally the workshop wherein are fashioned all plans created by man. The impulse, the DESIRE, is given shape, form, and ACTION through the aid of the imaginative faculty of the mind.

It has been said that man can create anything which he can imagine.

Of all the ages of civilization, this is the most favorable for the development of the imagination, because it is an age of rapid change. On every hand one may contact stimuli which develop the imagination.

Through the aid of his imaginative faculty, man has discovered, and harnessed, more of Nature’s forces during the past fifty years than during the entire history of the human race, previous to that time. He has conquered the air so completely, that the birds are a poor match for him in flying. He has harnessed the ether, and made it serve as a means of instantaneous communication with any part of the world. He has analyzed, and weighed the sun at a distance of millions of miles, and has determined, through the aid of IMAGINATION, the elements of which it consists. He has discovered that his own brain is both a broadcasting, and a receiving station for the vibration of thought, and he is beginning now to learn how to make practical use of this discovery. He has increased the speed of locomotion, until he may now travel at a speed of more than three hundred miles an hour.

MAN’S ONLY LIMITATION, within reason, LIES IN HIS DEVELOPMENT AND USE OF HIS IMAGINATION. He has not yet reached the apex of development in the use of his imaginative faculty. He has merely discovered that he has an imagination, and has commenced to use it in a very elementary way. 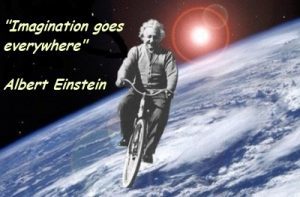 The imaginative faculty functions in two forms. One is known as “synthetic imagination,” and the other as “creative imagination.”

SYNTHETIC IMAGINATION:— Through this faculty, one may arrange old concepts, ideas, or plans into new combinations. This faculty creates nothing. It merely works with the material of experience, education, and observation with which it is fed. It is the faculty used most by the inventor, with the exception of the who draws upon the creative imagination, when he cannot solve his problem through synthetic imagination. 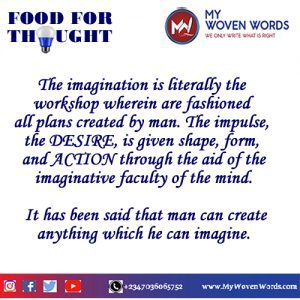 The creative imagination works automatically. This faculty functions ONLY when the conscious mind is vibrating at an exceedingly rapid rate, as for example, when the conscious mind is stimulated through the emotion of a strong desire.  The great leaders of business, industry, finance, and the great artists, musicians, poets, and writers became great, because they developed the faculty of creative imagination. Both the synthetic and creative faculties of imagination become more alert with use, just as any muscle or organ of the body develops through use. Desire is only a thought, an impulse. It is nebulous and ephemeral. It is abstract, and of no value, until it has been transformed into its physical counterpart. While the synthetic imagination is the one which will be used most frequently. Your imaginative faculty may have become weak through inaction. It can be revived and made alert through USE. This faculty does not die, though it may become quiescent through lack of use.