Rape, a sexual assault carried out against a person without that persons CONSENT sadly is becoming a trend in society. 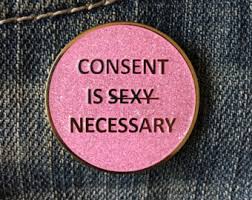 Nigeria has the highest amount of rape, most especially child rape, in Africa, which is extremely disappointing for such an overtly religious country.

Committing rape as shameful and animalistic as it is, is one thing, but getting away with it and having the victim suffer the consequences of your actions is simply heart-wrenching. It is rather sad and discouraging the way rape victims are treated compared to the perpetrators of the heinous crime.

Rape culture has the ability to leave a victim even more scarred than the actual act. In a society where rape victims are blamed for the act committed against them, it is little wonder that rape hasn’t gone out of fashion.

I don’t think I can ever understand what pleasure rapists derive especially when done against children. Of course rape victims are not just little children, they are also men and women. But it certainly is extremely rare to find a male rape victim being slut shamed or blamed for what has happened to him. Mostly it just serves as a blow to their masculinity. But they are also as affected by rape as much as women.

Being raped already leaves the victim emotionally, mentally and sometimes physically sick without adding the ever judgmental society to the mix. Rape culture is one of the major reasons why victims never report their rape. Children who are raped are even more affected as there is always the possibility of not being believed. It is a matter of the child’s word against that of the perpetrator’s. In most cases, the child is blamed for having gotten too close to the rapist and that would be the end of the discussion. 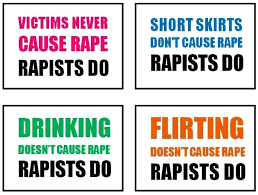 Adults who get raped already feel a sense of shame even without people knowing about it. Society has set peoples minds to believe that if you are raped, you must have brought it upon yourself. Perhaps you spoke too seductively or were too rude, or your dressing was too seductive. We are made to believe that a person who has been raped should be ashamed of themselves for having attracted such attention to themselves. We are told that rape isn’t that a big a deal because there are more ‘important’ issues plaguing the society. Nobody wants to acknowledge the effect it has on the mentality. No one is expected to play the victim or blame their deteriorating mental health on the fact that they were raped. Victims are expected to accept it and move on with their lives.

There is always a fear to come out and say “I was raped” when the only ones who should be afraid should be the perpetrators. But the victims have nothing to be ashamed of. Instead of making the victims feel disgusted with themselves that such a shameful act was carried out against them, we should be openly shaming the perpetrators. When people in power and religious leaders get away with being monsters and ridiculous excuses are made for them, the average citizen will never expect to be apprehended for their crime. If we are going to blame a woman in supposedly ‘provocative’ clothes for her rape, what do we say about the one who was completely covered showing little or no skin at all. What will we say about the seven years old child (male or female) whose body hasn’t fully matured.

With no specification to gender, we can all agree that rapists are sick people who do not deserve to roam the streets with humans. We need to not only feel compassion towards the ones who were raped but also be willing to show the right amount of rage, rightly expressed towards the perpetrators. We need to stop focusing on the ones who were raped and talk about the one who raped. Yes, violence cannot solve the problem, but there is a need to come out and talk about this plague in our society because rape culture isn’t something we should just accept. We need to speak out against what isn’t right and stop trying to cover up this immoral act.

It is long overdue to let these people pay for their crimes and instill in them a fear that hopefully permanently hinders rape in our society.

WHAT HOLDS US BACK FROM LIVING THE LIFE WE WANT