MyWovenWords » THE SUDANESE LATUKA TRIBE: WHERE GROOM KIDNAPS HIS BRIDE

THE SUDANESE LATUKA TRIBE: WHERE GROOM KIDNAPS HIS BRIDE

The Latuka people can be found in the South Easternmost corner of South Sudan, there are about 200,000 of them, and they’ve been living the same way for centuries. The people of Latuka, or Otuho as they’re commonly referred to, are predominantly farmers keeping large herds of cattle, sheep and goat. They practice subsistence farming, which means everyone farms for himself or his family. They grow crops like groundnuts, sorghum, maize and tubers like yam and potato. Each family has their own garden and house, but the tribe is very much a communal place. Certain village elders hold special positions of influence, but for the most part everyone shares equally. The Latuka have held onto their ethnic religion quite well, honoring elders and nature above all else. They’ve withstood the onslaught from Christian missionaries and the invasion of Islam into Africa better than other groups in the region. In fact, the only thing that’s change drastically is the technology they use and the clothes they wear—well, that they’re wearing clothes now when they hadn’t in the past. 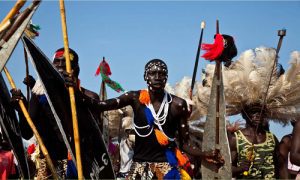 The Latuka people are mostly traditionalists who believe in nature and ancestral worship. Over the years, they have stayed true to their belief. They have defied all forms of religious penetration from the white missionaries down to the breeze of Islam which is major in North Africa. Another thing that’s interesting to note about the Latuka people is the fact that they promote a communal lifestyle in the tribe. They share what they have with one another and there’s no single person in authority, rather a group of elders.

In the Sudanese Latuka tribe, when a man wants to marry a woman, he kidnaps her. Elderly members of his family go and ask the girl’s father for her hand in marriage, and if he agrees, the father beats the man as a sign of his acceptance of the union. If the father disagrees, the young man is at liberty to return the girl to her father’s house or marry her as he so wishes. however, the man usually forcefully marries the girl anyway.

Courting among the Latuka is both beautifully ritualized and (not so) frighteningly foreign. We use the word frightening, but only in the sense that it’s unique, and slightly different from western dating and courting traditions. It sounded drastically different and alien to us at Outward On, but only until we sat down and discussed it objectively.

To get to the point, when a young man wants to marry a girl, he kidnaps her from her home, at which point the young man and his elder male relatives approach the girl’s father to ask him for their blessing to marry. The father will either give his consent or not, with a “yes” resulting in the father physically beating the man he’s just permitted to marry his daughter. If the father responds “no”, the young man will return the father’s daughter, or he will refuse and marry her anyway.

Aside from the kidnapping, the beating and the level of involvement from the bachelor’s family, this ritualized practice isn’t that dissimilar to other cultures. Many Americans still undergo the same formalities, even if the eventual nuptials are considered a foregone conclusion by both families. Men have always sought a girl’s father’s permission to marry her. It’s taken different forms through the ages, but it has always been there.

People will point to the kidnapping and beating as signs of incivility and barbarism, but—if we speak loosely—the same thing happens in the English speaking world all the time. Modern couples often date for years, living together long before marrying, and to a father this probably seems like his daughter’s boyfriend has stolen her away already. 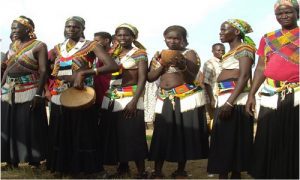 What about the beating? We ought to remind ourselves that there is often a very earnest and heartfelt discussion about what happens if the young man ever mistreats a father’s daughter. It’s not the physical pain that matters. What is important in the Latuka tradition, and similarly in the conversation between a girl’s father and her prospective fiancé, is the idea of responsibility passing from one male to another, and there being consequences for not assuming that responsibility. It’s part male dominance and part reminder that there is a price that has to be paid for the right to marry. Entering that commitment shouldn’t be easy; it should be difficult. A man should want to marry a woman enough that he’s willing to be beaten for her. It’s about the sacrifices he’s willing to make for the woman he loves.

You visually see this hand-off from father to son-in-law in “traditional” Western weddings when a father walks his daughter down the aisle, physically passing her from himself to her fiancé. Gender inequality conscious people will likely cringe at the way women are treated as a commodity, being given from one man to another, but this is a universality if ever there has been one in earth’s history. The Latuka tradition and Western practices aren’t as dissimilar as most people think.

For a people who’ve lived and carried on the same traditions for centuries, with little more changing than the clothing on their backs, the wedding traditions of the Latuka are remarkable modern in their primitiveness. The biggest distinctions between Latuka courting and Western engagements aren’t the kidnappings or beatings, but it’s the familial involvement on behalf of the young man that marks them as unique.