MyWovenWords » THE FEARLESS AND GALLANT AMAZONS OF DAHOMEY

THE FEARLESS AND GALLANT AMAZONS OF DAHOMEY

THE FEARLESS AND GALLANT AMAZONS OF DAHOMEY

From daughters to soldiers, from wives to weapons, they remain the only documented frontline female troops in modern warfare history. The Dahomey Machete remains a great weapon of reference.

A sub-Saharan band of female terminators who left their European colonizers shaking in their boots, foreign observers named them the Dahomey Amazons while they called themselves N’Nonmiton, which means “our mothers” in Fon, the language of the Fon people of Dahomey, now in present-day Benin.

Some European historians and observers called them the Dahomey Amazons as they reminded them of the mystical and powerful all-women’s army called Amazons in Greek mythology. 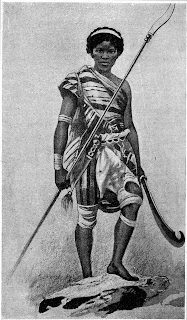 Protecting their king on the bloodiest of battlefields, they emerged as an elite fighting force in the Kingdom of Dahomey in, the present-day Republic of Benin. Described as untouchable, sworn in as virgins, swift decapitation was their trademark.

They were rightly feared throughout Western Africa for over 250 years, not only for their fanatical devotion to battle but for their utter refusal to back down or retreat from any fight unless expressly ordered to do so by their king.

If you were some poor conscript douchebag militia soldier hanging out around your barracks and you saw these scary-as-fuck kill-chicks suddenly start charging out of the woods in your direction, screaming their war chants with their muskets barking fire and their signature double-edged two-foot-long Dahomey Machetes brandished threateningly over their heads, you had one fleeting moment to overcome your crippling panic and defend yourself.

Because if you failed to kill them – and I mean if you failed to kill every single last one of them, some
the murderous woman was going to club your unconscious with a musket butt, drag you back to her capital, chop off your head with one swing of her Dahomey Machete, boil the skin off of your decapitated face, and then use your skull to decorate the royal palace.

Created around 1645 by the Dahomey King Ada Honzoo, the Amazons weren’t initially designed to serve as frontal assault shock troops sent in to crush the enemy’s spirits (and skulls) in a frenzied wave of bloodlust fury.

Instead, they started out as a small team of women who specialized in bringing down elephants, and who would go out on organized, efficient pachyderm hunts while the men were out fighting in wars. Eventually, possibly due to a lack of manpower or possibly because of their ruthless efficiency, Ada Honzoo promoted them to his personal bodyguard unit, expanding the unit to 800 women warriors with spears, bows, and war clubs, which in turn grew in size to an elite military unit of over 4,000 warriors.

As a shout-out to their roots, the Amazons chose to honor their heritage by naming their first battalion the Elephant Destroyers. The second battalion, it should be noted, were known as the Reapers – women who ditched those pesky flintlock muskets and instead went to battle armed with a razor-sharp three-foot Dahomey Machete they wielded with two hands.

Theories suggest they started as a corps of elephant hunters who impressed the Dahomey King with their skills while their husbands were away fighting other tribes. A different theory suggests that because women were the only people permitted in the King’s palace with him after dark, they naturally became his bodyguards.

Whichever is true, only the strongest, healthiest, and most courageous women were recruited for the meticulous training that would turn them into battle-hungry killing machines, feared throughout African for more than two centuries.

A French delegation visiting Dahomey in the 1880s reported witnessing an Amazon girl of about sixteen during training. After beheading a prisoner, she wiped the blood from her Dahomey Machete and swallowed it, while her fellow Amazons screamed in frenzied approval.

Only the strongest and most courageous women were recruited into the group which bound the women legally to the king in a vow of chastity. As such, they were disallowed to marry or have children. Some women joined out of their own volition, but others were enrolled to become soldiers by husbands who complained that they were uncontrollable.

These women, called the Ahosi of Dahomey, Mino, or the Dahomey Amazons, were famous for their incredible ability to fight men. From the start, they were trained to be strong, fast, ruthless, and able to withstand great pain. Exercises that resembled a form of gymnastics included jumping over walls covered with thorny acacia branches.

Sent on long 10-day “Hunger Games” style expeditions in the jungle without supplies, only their Dahomey Machete, they became fanatical about battles.

To prove themselves, they had to be twice as tough as the men. Often seen as the last (wo)men standing in battle, unless expressly ordered to retreat by their King, the Dahomey women fought to the death– defeat was never an option.

Joining the group required mercilessness. One recruitment ceremony involved testing if potential soldiers were ruthless enough to throw bound human prisoners of war to their deaths from a fatal height.

COLONIZATION OF DAHOMEY AND THE END OF THE AMAZONS

The N’Nonmiton (our mothers), as they fondly called themselves, often fought to the death unless expressly ordered to retreat by the King. After the Franco-Dahomean Wars, in which many French soldiers died for underestimating the Amazons, the legionnaires wrote about the “incredible courage and audacity” of the Amazons.

Even after French expansion in Africa in the 1890s subdued the Dahomey people, their reign of fear continued. Uniformed French soldiers who took Dahomey women to bed were often found dead in the morning, their throats slit open.

Of the 4,000 Dahomey Amazons under King Behanzin’s command, nearly all of them were killed hurling themselves fearlessly into battle. Only 50 women survived, and most of them, awesomely enough, went to the United States and joined Buffalo Bill’s Wild West Show.

They fought bravely, nobody can deny that battling the French in 24 pitched battles between 1890 and 1894, but ultimately their sword-swinging mayhem was no match for a modern industrial world power with top-of-the-line weaponry.

Their charges were beaten off by intense gunfire, and in hand-to-hand combat, the twenty-inch French rifle bayonets had roughly twice the reach of the Dahomey knives and Dahomey Machetes.

The French conquered Dahomey in January 1894, driving King Behanzin into exile. The group was disbanded in the 20th century as part of the French colonial expansion. Nawi, the last surviving Dahomey Amazon, died in 1979 at the age of 100.

TRIBUTE TO THE AMAZONS

A Dahomean who grew up in Cotonou in the 1930s recalled that he regularly tormented an elderly woman, who used to be an Amazon he and his friends saw shuffling along the road, bent double by tiredness and age. He confided to the French writer Hélène Almeida-Topor that:

one day, one of us throws a stone that hits another stone. The noise resounds, a spark flies.
We suddenly saw the old woman straighten up. Her face is transfigured. She begins to march proudly…
Reaching a wall, she lies down on her belly and crawls on her elbows to get around it.
She thinks she is holding a rifle because abruptly she shoulders and fires,
then reloads her imaginary arm and fires again, imitating the sound of a salvo.
Then she leaps, pounces on an imaginary enemy, rolls on the ground in furious hand-to-hand combat, flattens the foe.
With one hand she seems to pin him to the ground, and with the other stabs him repeatedly.
Her cries betray her effort. She makes the gesture of cutting to the quick and stands up brandishing her trophy….
She intones a song of victory and dances:
The blood flows,
You are dead.
The blood flows,
We have won.
The blood flows, it flows, it flows.
The blood flows,
The enemy is no more.
But suddenly she stops, dazed. Her body bends, hunches, how old she seems, older than before! She walks away with a hesitant step.

She is a former warrior; an adult explains…. The battles ended years ago, but she continues the war in her head.

In 2015, a French street artist, YZ, begun her own campaign to pay tribute to the fierce female fighters of the 19th century. Working in Senegal, south of Dakar, she pastes large-format photograph prints she found in local archives of the warrior women.

While they were also said to be the most feared women to walk the earth, they would also change how women were seen and respected in Africa and beyond.