WELCOME TO MY WOVEN WORDS

THE ETHIOPIA BODI TRIBE: WHERE MEN MUST DRINK BLOOD TO BE CHAMPION

Slim might be in elsewhere but for Ethiopia’s Bodi or Me’en people, bigger is always better

Ethiopia is a land of many cultures that have been preserved despite western civilization. Along the Lower Omo valley river in Southern Ethiopia resides one of these kinds: the Bodi Tribe. The Bodi people are neighbours to the Mursi Tribe. The Bodi people are agriculturalists who still engage in trade by barter system.
These pastoral people revere their cows. Their cows are so special to them that its blood together with fresh milk is a source of food for this people. Rather than kill the cows, they make a hole in one of its veins to get the blood out and close it back with clay.
These animals are also used in certain ceremonies. Among the ceremonies is the peculiar new year celebration. the tribe, which lives in a remote corner of Ethiopia’s Omo Valley, is home to an unusual ritual which sees young men gorge on cow’s blood and milk in a bid to be crowned the fattest man. Six months after starting the regime, the men emerge to show off their newly engorged physiques and for a winner to be chosen. The champion fat man is then feted as a hero for the rest of his life.

Trending
ILU AJE (TOWN OF WITCHES): A TOWN IN OYO STATE
THE KA’EL CEREMONIAL COMPETITION
At the start of each year [the month of June in the Gregorian calendar], they hold a “Ka’el ceremony” (ceremony of fat men) to mark the new year celebrations. The Ka’el ceremony is a competition for men who are not married which involves drinking the blood mixture. The 14 clans present a man who is single and they deem fit for the competition. Those who are contesting prepare for six months. During this period, he must not have sex and must not be seen outside his hut.
There is a procedure for drinking the first bowl of 2 litres at sunrise while the rest comes easy and is taken all day.
It is not unusual to see some of these contestants vomit the mixture because two litres was more than they can drink.
Sadly, the Ka’el ritual and the Bodi’s traditional way of life is under threat from the Ethiopian government who plan to resettle 300,000 people from all over the country on their lands. Despite this, the tribe continue as they always have, and still celebrate Ka’el in traditional style each June.
The contest begins six months before the ceremony. Every family is allowed to present an unmarried man for the challenge, who, after being chosen, retires to his hut and must not move or have sex for the duration.
Food comes in the form of a cow’s blood and milk mixture, served regularly to the men by women from the village. The cows are sacred to the Bodi tribe so they are not killed. The blood is taken by making a hole in a vein with a spear or an axe, and after that, they close it with clay.
Because of the scorching temperatures, the men have to drink the two-litre bowl of blood and milk quickly before it coagulates, but not everyone can handle drinking so much at speed. The fat men
drink milk and blood all day long. The first bowl of blood is drunk at
sunrise. The place is invaded by flies. The man must drink it quickly before it
coagulates but some cannot drink everything and vomit it. On the day itself,
the men cover their bodies with clay and ashes before emerging from their huts
for the walk to the spot where the ceremony will take place.

Decoration: The dress code for the ceremony also includes a selection of beautifully worked headdresses, in this case, one made from cowrie shells and ostrich plumes

Thanks to the weight gain, many of them find covering the short distance tougher than the weeks spent fattening up. ‘Some fat men are so big that they cannot walk anymore, 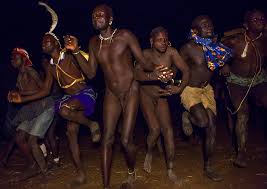 On the day of the competition, they cover themselves with clay and ashes and display their acrobatic skills.
As part of the competition, they run around sacred trees for hours sometimes with the assistance of women. While at it, they are under the watchful eyes of their judges. After this, the people use a sacred stone on a cow before killing it. The intestines are then used to predict what the year holds. When a winner is chosen by the elderly judges, they crown him, “fat man of the year title.”
Just like other beauty pageants, there is a prize only this time, it is the lifelong admiration of the Bodi people.
Photo Credit: Eric Laforrgue
TABLE OF CONTENTS show
You May Also Like
Related

AN INTERESTING AFRICAN FOLKTALE: “THE WOMAN, THE ...

Your Ads Could Be Here

Your Ads Could Be Here