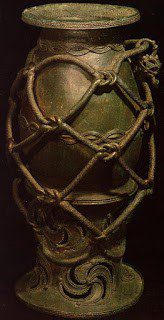 The bronze work of Igbo-ukuw which can be found in Enugu state remains as the highest of the ancient works of Nigeria art.
It is possible that the inhabitants of Igbo-Ukwu had a metalworking art that flourished as early as the ninth century. Three sites have been excavated, revealing hundreds of ritual vessels and regalia castings of bronze or leaded bronze that are among the most inventive and technically accomplished bronzes ever made. The people of Igbo-Ukwu, ancestors of present-day Igbo, were the earliest smithers of copper and its alloys in West Africa, working the metal through hammering, bending, twisting, and incising.
They are likely among the earliest groups of West Africans to employ the lost-wax casting techniques in the production of bronze sculptures. Oddly, evidence suggests that their metalworking repertory was limited and Igbo smiths were not familiar with techniques such as raising, soldering, riveting, and wire making, though these techniques were used elsewhere on the continent.

Regardless, the talent of these casters was truly astonishing. Many of the castings were made in stages. For instance, in one bronze bowl set on a flat stand found at Igbo-Ukwu, small decorative items including insects and spirals were cast first and placed in the wax model before the main parts of the bowl were made. The vessel itself was then cast in two parts and fitted together by casting a middle band. In addition to a variety of ritual vessels (whose designs appear to reproduce the form of gourd vessels to which metal handles have been attached), many other bronze items have been found at Igbo-Ukwu, including pendants, crowns and breastplates, staff ornaments, swords, and fly-whisk handles. These works were also found with tens of thousands of beads, attained through trade for slaves, ivory, or spices.Igbo-Ukwu bronzeworking was an isolated phenomenon at the time, but bronze casting developed several centuries later in other parts of Nigeria.
Source: Igbo-Ukwu (ca. 9th century) | Thematic Essay | Heilbrunn Timeline of Art History | The Metropolitan Museum of Art