HEBREW ISREALITE OF NIGERIA/THE YORUBA AND OTHER CANAANITE 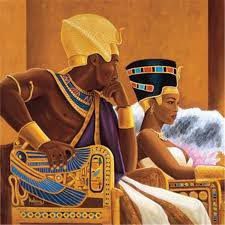 Its so destructive when people leave their own history to tell other people’s without proof. Just like white man came to Africa parted the lands, reduced our history to few centuries claiming Greek was the start of creation of 4,000 years. They called us monkeys but now with their own DNA research found out that all people except Africans are Neandathals. what a beautiful name to give caravan, ape and gorilla people. DNA proof white people have 4-5% of animals mixed with their DNA, means they were not created in the image of Ehyeh Asher Ehyeh (lye Ashe Iye) The Creator but Annunakis who created them in the labouratory .

Some Yoruban knew there history and those Yoruban saying ill things about themselves need to thoroughly do their research. Firstly, We are not related to Nimrod though he is Oduduwa but Kushite and we are Shem descendants. Oduduwa is only a royal title passed down from Noah to his descendants and is kingship, war hero title. Noah is Nuah in Egyptian children of ham, it is Oduduwa in Yoruba and a Yemen Hebrew lsraelite king in Hymya in Yemen by the name Dhu Nuwa in 500AD fled to lle ife to create more states. He escaped from the enemies who slaughtered the royal family. He did not commit suicide or drown in the sea as narrated in the Arabia history. OduNoah, OduNuah, Oduduwa, Dhu Nuwa, Noah or Nuah is only title, even the Benin people have their own version. Other Oduduwas are Abraham, King David and so on.

Origin of Yoruba
According to chronological Historb of Yoruba Dynasty in the Alafin palace, We migrated from lsrael to captivity in Assyria and Babylon 700-600BC . After the collapse of the Assyria and Babylonia empire we fled to West Africa land of Shem because Nebukanezer brought foreigners to occupied lsrael. Yoruba left lsrael around the time king Jeroboam (Olugbogi) and king Joash (Oluasho) were kings in Israel. Not all lsraelites returned with prophet Ezra because of civil in Israel. Final batch joined their people in 70AD when Israel was finally destroyed. The 1747 map of West Africa showed the Kingdom of Judah which later became slave coast in Badagry, Lagos Nigeria. Judah was part of old Ile ife Owodaiye means Whdah or Odaiye means Judah or Ouidah (Portuges) or Fidah in French. During the Antlantic Slave trade Judah was the target by the Romans and that is why they came to West Africa to finish Creator’s own people. Oyo empire fought with the Fon king of Dahomey who was capturing the Odaiye/judaites to the Europeans and prisonals of war from the enemies side too were enslaved by Yoruban. DNA proof all negroes (people with afro kinky hair) migrated to Africa while the Ethiopians, Somalians and Sudaness people with straight and coily hair texture are Africans but migrated to Arabia. Ancient Ethiopia was Africa, West Asia including India and Arabia and Israel, and Greek and Spain. They were called Ethiopians, jet black and brown people afro kinki people while those in india have straight or coily hair texture. Light skin were minority and were said to be of deferent race by the Arabs. Modern day Ethiopia was later called West Ethiopia and now the only Ethiopia nation.

DNA Proof
DNA is the Creator’s wonders even the scientist believe there is a Creator of the beautiful heavens and earth. DNA links Luyah of Kenya who are Descendants of biblical Joseph (Yuya) and Gabon descendants of Orugu or Orungun (biblical Reuben). Yoruba land occupied from Nigeria to Benin Republic, Togo, Ivory Coast and Ghana. Yoruba use to call themselves Aku meaning Akuibe or Akusibe as the biblical Jacob. When Yoruba have twins that is why they always make the last of the twins the elder, other Aku are in Senegambia and the Creols in Sierra leone. Yoruba was never the name the people but the language and was later changed by Samuel Ajayi Crowther from Aku to Yoruba to please the Europeans so we can forget our origin. Yoruba thus means Yerubbal meaning “Ati she eruba bale” that is the people cause baal terrible fear when they destroyed his evil alter. Yoruban also linked with King Yeroboam “great people), to remind them of the time they left Israel. West Africa language including the Zulus in South Africa is Shemetic pure Hebrew, ancient Aramic and Egyptian. Yoruba is pure Hebrew and Egyptian, its becomes Hebrew when English version of Hebrew word is removed, e.g the word shibboleth in not pure Hebrew its English version, correct word is Shibbole and is the same in Yoruba and in meaning. Rishon in Hebrew is Greek version, it is Risha but when fully written is orisha means ancestors. Aaron is not Hebrew word but Greek, Aare is Yoruba and Hebrew word for a leader. Dan in Hebrew have same meaning in Yoruba meaning Danilare or Damilare (judge or judge me). Hebrew deal with 3 letter root words, E .r. i. could mean Jerimaiah.

The foreigners could not accurately translate our book that is why there were errors in the bible. Eri is not the true name but English version, Eri means my awake one or to arouse one self or to suddenly stir up like excel. It would be Ori or Ari, just like Arieli is Greek version not Hebrew word. There is Aro in Yoruba word as in Arodi in the bible but to conveinced anyone as the same word will have to have same meaning. The modern day Ashenaz jews only occupied lsraeli in 1948 by balfor declearation between Britain and America. They converted to Judaism in 700AD by their king Bulan . Ancient lsraelites were black and still are today never light skin. Yoruba language is close to Egyptian becauses most of the pharaoh kings were Hebrew, king David or Daud is Pharaoh Pseuenes of Egypt (Ipesinuola), Abraham (Amenemhat I of Egypt) means Oba Ashiwaju king in front not Amen in front because Mene is the title of Oba in Egypt not Pharaoh, pharaoh means big house like ile ife. Moses or Moshe is Tutmose lll in Egypt (Moshetutu), that is sacrifice to God Amen or Thot. Ehyeh Asher Ehyeh (Iye Ashe Iye). the Ashe is also same meaning in Egyptian word to say it is borrowed word in Hebrew. Egyptian say Amen to the god Amen Ra, Yoruba say Ashe, Amin is Roman catholic corruption to make them say amin when Yoruba bible was translated from latin.

Yoruba and Ifa religion
Ifa religion which l myself have condemned in the past because of ignorant of knowledge of our history is infact biblical. Ifa is the oldest religion in the world and is proven to be 8,000 years old. It was passed down from Noah or Odunoah or odunuwa or Dhu Nuwa to Shem and Ham and Kush to their descendants. Ifa is the Ephod in the bible and the verses are the true Torah not the one called five books of moses because it is not accurate and Moses never wrote it but 500 years after his death. Ephod is not only the garment for priests but also the tray and the object to consult the Creator. The true Levi are Oluwo or Luwo and the Rabbis are Araba. Europeans called it vodu but is Odu and Odu is the father of Noah not Lamech (Odu ni baba Iwa). Before 1848, Yoruba places Yah as the suffix of their names like Tobiyah now Oluwatobi using (Odonuwa or Oluiwa). When Yoruba children started to attend Christian and muslim schools, they dropped Yoruba names as evil and Ifa as juju. Europeans forced Yoruba to abbreviate lfa to Indeginious Faith of Africa before registerd as a religion. Ifa is Ephad and Ifadida is Ephadida not Ephod (Greek version).

Yoruba Hebrew Israelites
Yoruba Hebrew Israelites heritage is not for every Yoruba to claim even the anthropologists and researchers are waiting for us to come forward. it is for Yoruban that are ready to accept their heritage and the Creator himself will return his people as prophesised. Some Yoruban say they are muslim, it cannot be true unless they are convert because the original muslim are the children of ham including Egyptians who spread lslam to Arabia slaughtering the true Arabs and drove them out. They themselves were driven out of Arabia by the light skin Persians. Original Christians were the descendants of Kush and they wrote the book of Enoch, Ethiopia language is original greek and latin as they once ruled Europe and built castles. Negroes are the true Arabs and pure black and still black.
Yoruba are the people of Yah, Eriwo or Ariwo or Alariwo Yah lo wodi lsrael, That is AlleluYah made the wall of Jericho collapsed, Eriwo Yah is Shout of Yah. Selah Shalom (Ashela Ashalafia)
Source: They Don’t care (Nairaland)