by Johnson Okunade
in Woven Mythology
Reading Time: 1 min read
A A
0

SHARE THIS POST:
Loki in
a god who had the ability to change his shape and sex. His father was the giant
Farbauti and his mother was Laufey. In most cases Loki helped
the other gods with
his clever plans but sometimes he behaved in a malicious manner towards
them. Loki was
bound to a rock as punishment just like Prometheus and Tantalus in
Greek Mythology. Loki was
also considered a god of fire. 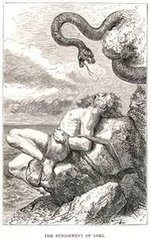 His wife
was the giant Angerboda and his kids were Hel, the goddess of death;
Jormungand, the serpent that surrounds the world; Fenrir, the wolf and
Sleipnir, Odin’s
eight-legged horse.
Source: Greek Mythology

THE INDONESIAN ASMAT: WHERE CANNIBALISM IS HEROIC

MYTHS AND LEGENDS OF HEPHAESTUS

THE HISTORY AND LEGENDS OF THE AMAZON WARRIOR WOMEN

LEGENDS AND MYTHS OF HERMES