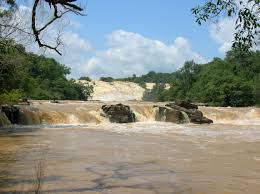 VERY many years ago,
before the oldest man alive at the present time can remember, the towns of
Ikom, Okuni, Abijon, Insofan, Obokum, and all the other Injor towns were
situated round and near the Insofan Mountain, and the head chief of the whole
country was called Agbor. Abragba and Enfitop also lived there, and were also
under King Agbor. The Insofan Mountain is about two days’ march inland from the
Cross River, and as none of the people there could swim, and knew nothing about
canoes, they never went anywhere outside their own country, and were afraid to
go down to the big river. The whole country was taken up with yam farms, and
was divided amongst the various towns, each town having its own bush. At the
end of each year, when it was time to dig the yams, there was a big play held,
which was called the New Yam feast. At this festival there was always a big
human sacrifice, fifty slaves being killed in one day. These slaves were tied
up to trees in a row, and many drums were beaten; then a strong man, armed with
a sharp matchet, went from one slave to another and cut their heads off. This
was done to cool the new yams, so that they would not hurt the stomachs of the
people. Until this sacrifice was made no one in the country would eat a new
yam, as they knew, if they did so, they would suffer great pain in their
insides.
When the feast was held,
all the towns brought one hundred yams each as a present to King Agbor. When
the slaves were all killed fires were lit, and the dead bodies were placed over
the fires to burn the hair off. A number of plantain leaves were then gathered
and placed on the ground, and the bodies, having been cut into pieces, were
placed on the plantain leaves.
When the yams were
skinned, they were put into large pots, with water, oil, pepper, and salt. The
cut-up bodies were then put in on top, and the pots covered up with other clay
pots and left to boil for an hour.
The king, having called
all the people together, then declared the New Yam feast had commenced, and
singing and dancing were kept up for three days and nights, during which time
much palm wine was consumed, and all the bodies and yams, which had been
provided for them, were eaten by the people.
The heads were given to
the king for his share, and, when he had finished eating them, the skulls were
placed before the Ju Ju with some new yams, so that there should be a good crop
the following season.
But although these
natives ate the dead bodies of the slaves at the New Yam feast, they did not
eat human flesh during the rest of the year.
This went on for many
years, until at last the Okuni people noticed that the graves of the people who
had been buried were frequently dug open and the bodies removed. This caused
great wonder, and, as they did not like the idea of their dead relations being
taken away, they made a complaint to King Agbor. He at once caused a watch to
be set on all newly dug graves, and that very night they caught seven men, who
were very greedy, and used to come whenever a body was buried, dig it up, and
carry it into the bush, where they made a fire, and cooked and ate it.
When they were caught,
the people made them show where they lived, and where they cooked the bodies.
After walking for some
hours in the forest, they came to a place where large heaps of human bones and
skulls were found.
The seven men were then
securely fastened up and brought before King Agbor, who held a large palaver of
all the towns, and the whole situation was discussed.
Agbor said that this bad
custom would necessitate all the towns separating, as they could not allow
their dead relations to be dug up and eaten by these greedy people, and he
could see no other way to prevent it. Agbor then gave one of the men to each of
the seven towns, and told some of them to go on the far side of the big river
and make their towns there. The others were to go farther down the river on the
same side as Insofan Mountain, and when they found suitable places, they were
each to kill their man as a sacrifice and then build their town.
All the towns then
departed, and when they had found good sites, they built their towns there.
When they had all gone,
after a time Agbor began to feel very lonely, so he left the site of his old
town and also went to the Cross River to live, so that he could see his
friends.
After that the New Yam
feast was held in each town, and the people still continued to kill and eat a
few slaves at the feast, but the bodies of their relations and friends were
kept for a long time above ground until they had become rotten, so that the
greedy people should not dig them up and eat them.
This is why, even at the
present time, the people do not like to bury their dead relations until they
have become putrid.