by Johnson Okunade
in Woven Campus
Reading Time: 2 mins read
A A
0 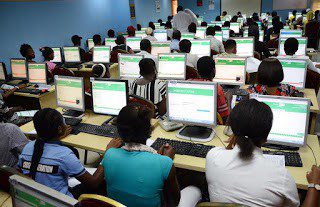 The Joint Admissions and Matriculation Board, JAMB, has claimed that its 120 cut-off mark will put an end to back-door admission in the country.
The exam body added that it had introduced a Central Admissions and Processing System to monitor compliance with the minimum prescribed cut-off mark and other admission guidelines, as well as empower candidates to track the process of admission.
The Head of Public Affairs, JAMB, Mr. Fabian Benjamin, said this in a statement issued on Monday.
According to the statement, high cut-off mark is responsible for the flight of many Nigerians to “glorified secondary schools called universities” ‎in neighbouring countries and an increased pressure on the naira to pay school fees in foreign currencies.
The statement added, “The cut-off marks previously brandished to the public were never strictly followed by most institutions. Some were going behind to admit candidates with far less scores, while others admitted candidates who never sat for the Unified Tertiary Matriculation Examination.
“This act, to say the least, is very distasteful and damaging to our national data and identity. Unfortunately, the public has been kept away from this fact for such a long time and now that we are saying it the way it is and working to address it, the public is criticising us and using non-existing parameters that only announced and not followed.’’
Adding that the JAMB would not relent in “supporting policies that would bring our education system out of the woods’’, the statement said that it would pursue the quest to ensure realistic benchmarks for national development.
“It is necessary to explain that the 120 cut-off mark does not in any way suggest that if you score 120 admission is guaranteed. Institutions will admit from the top to the least mark. It’s also a known fact that for you to study a course, say Hausa, in Nigerian universities, you will need a credit in Mathematics.
“However, in London, all you will need is a credit in Hausa and English. This and many other poorly thought-out policies have pushed frustrated candidates out of Nigeria to the developed and neighbouring African nations for education, which they could not get at home.
“The issue that all of us should be concerned about is how to address the flight of Nigerians to glorified secondary schools called universities in Ghana, Uganda, even in The Gambia and other countries. How do we ensure that whatever we do has positive multiplier effects on other sectors of the economy, if we deny our candidates the opportunity to school in Nigeria?,’’ it added.
Source: Daily Post