MyWovenWords » Decomposing body of a Female Unizik student found in her room, 4 days after she died

Decomposing body of a Female Unizik student found in her room, 4 days after she died

by Johnson Okunade
in Woven Campus
Reading Time: 1 min read
A A
0 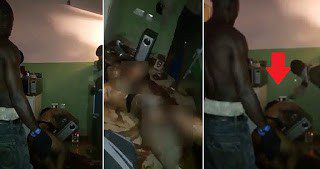 The decomposing body of a Female Student of Nnamdi Azikiwe University, Akwa was found in her apartment.
A Student of the Prestigious Nnamdi Azikiwe University Awka, who was always known to mind her business, who always come in and go out of her Lodge at her own discretion has been found dead in her room after four days.
The incident occurred within the first week of August 2017 and no one including her neighbors knew of the incident until after 4 days.
After several days of absence, the lodge residents began to wonder where she might have traveled to, it was noticed that her room door had visits of huge houseflies struggling to get into the room and occasional smell of her decaying body oozing out around her apartment.
With the combined effort of the residents in the area, the door was broken down to uncover the misery of her absence and what exactly brought the flies and smell around.
Source: Yaba Left Online