Yoruba Culture and the Left Hand

by Johnson Okunade
in Woven Culture
Reading Time: 3 mins read
A A
0 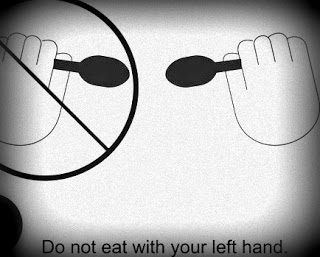 The Yoruba people are one of the three major ethnic groups in Nigeria. They inhabit the south western part of the country and are the second most populated of the three major Nigerian ethnic groups, followed by the Igbos of eastern Nigeria. The Yoruba people are well known for their strong desire for peace and unity at home and in diaspora. They are also known for their rich cultures and traditions which include: lifestyle, religions, dressings, beliefs and so on. The Yorubas, also called ‘Omo Odua’ (offspring of Oduduwa- the progenitor of the Yoruba tribe), cherish every aspect of their cultures and traditions; none is being overlooked or handled with less importance and care because they practice them daily.
Ethics is a vital aspect of the Yoruba culture. The Yoruba attach great importance to ethical significance because they believe that this aspect of their culture is highly essential to every individual’s life. They also believe that it will be easy for someone with good ethics to succeed in life and the other way round for the one who lacks it. Therefore, the Yoruba people use all means to teach their children good manners and morals and how to use them in the society. Some of the means they use are: storytelling, songs, poetry, oral lecturing and so on.
However, the use of left hand falls under this aspect. In Yoruba land, it is considered immoral, disrespectful and unhealthy to do certain things with the left hand, such as, eating, giving directions, greeting, giving and collecting, etc. This has no reason other than the belief attached to the left hand that it is meant for unsanitary purposes like: picking or removing dirt from a place, cleaning of oneself after using the toilet, picking of the nose and so on. Yoruba elders take all chances to correct their younger ones when found using the left hand for what it is not meant for.  Older Yoruba people will never with their left hand give or collect from their younger ones because they don’t want them to cultivate or perpetuate the so called uncultured act. The Yoruba people even go to the extent that they dubbed any child who gives directions to his/her father’s house as ‘omo ale’ which means bastard; they will say, “omo ale lo ma fi owo osi juwe ile baba re”; which means “only a bastard will give directions to his or her father’s house with the left hand”. This shows the extent at which the Yoruba people esteems ethics in their culture.
Also, learning institutions (primary schools in particular) in Yoruba communities take part in the quest to kick down the wrong use of left hand, particularly in writing, among their students. Mrs Olufunke Esuruoso share her experience with mywovenwords.com on how her primary school teacher knocked the back of her left fingers for writing with her left hand- “Personally I do not consider being left-handed a stigma. We all have two hands. I don’t know anyone who would choose to be without their left hand. Some cultures and religions frown on the use of the left hand. For me, I do not even notice the difference. I can understand why the left hand was considered “dirty”. Most are said to use their left hands to clean themselves up after using the toilet. Hence the reference to uncleanliness. However with decent hygiene habits this should not be a problem. Your last question: My parents let me be natural with my left hand. This was not so at school. In Primary One, my teacher would rap my knuckles each time I tried to write with my left hand. So I switched to the right hand for writing. Not at home though. This affected my writing for a long time. However, there were other ways I had to adjust to using my right hand. When I was growing up there were no left-handed knives or scissors. I will peel yams with my right hand but sew clothes with my left.”
However, this unhealthy belief the Yoruba people attach to the left hand does not affect the whole aspect of their indigenous religions. The left hand is not much condemned in this aspect because it serves important purposes. For instance, the religion of Ifa consider the left hand sacred as it is mostly used for important purposes and rites such as looking into someone’s future by looking into his/her left palm; holding of sacred religious items and so on.
More importantly, what gave birth to this belief? Why was this belief attached to the left hand in the first place? The answer appears mysterious like many other beliefs in Yoruba land. But if scrupulously examined, it can be scientifically said to be the natural weakness of the left hand compared to the right that led to the much preference of the latter and the condemnation of the former. But today, the condemnation of the left hand in Yoruba land has begun to fade, but at a very low rate, and consequently, some Yorubas have preferred to call the left hand ‘owo alaafia’ which literally means ‘hand of peace’ instead of ‘owo osi’, the original Yoruba word for the left hand.
It must be brought under discussion that other ethnic groups in Nigeria and the world outside also share this belief attached to the left hand, but in distinct ways.
Dear readers, feel free to share your experiences or/and views on the usage of left hand in your society by using the comment box below.