by Johnson Okunade
in Woven Fashion
Reading Time: 2 mins read
A A
0 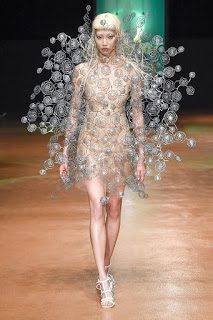 “Although some people have the impression that I 3-D print whole collections, I would estimate that 80 percent of everything we make is by hand,” Iris van Herpen said . Van Herpen started her line 10 years ago with almost completely handmade clothing—she didn’t even own a sewing machine!—but was also the first to experiment with 3-D printing on the major runways. Her Fall ’17 Couture collection, shown in Paris on Monday, featured some of her most stunning 3-D-printed creations yet, including a few looks that toed the line between fashion and sculpture. Look 18, the Aeriform dress, was signature Van Herpen in its combination of high-tech innovation and incredible lightness—but you’ll be surprised to learn that it actually wasn’t 3-D printed. Here, she tells us the story behind the piece and what went into making it.

“Developing the material of the Aeriform dress was a process that took six months of trial and error with the architect Philip Beesley and his studio,” Van Herpen explains. “We tried 3-D printing for this dress and made printed molds to cast this pattern, but I wasn’t satisfied with the way it moved. So we stopped the 3-D printing and instead, we [decided to] laser cut the superfine metal [instead], which we then manipulated into half-sphere domes by hand. Because of this, I could create lots of volume and movement without the weight. After that, the domes were attached through heat-shrinking tubes and some bits were adjusted and fine-tuned with needle and thread. There is also silk tulle lining the inside, and to make it look seamless, the lining was hand-stitched from eight layers of tulle in a gradation.” 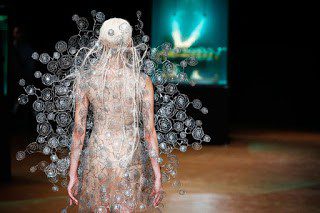 At first glance, those “feathery light” metal domes resemble roses, which ties in with Van Herpen’s other main inspiration: nature. “For this whole collection, I was inspired by the work of the Danish artists Between Music,” she says. “Their liquid voices and the subsonic darkness have overwhelmed me. I dove into the contrasts between water and air, between inside and outside, between darkness and lightness. So air and water are reflected in the volumes, ripple patterning, and translucent layering in the collection,” she continues. “If you look at this dress in motion, you see delicate domes in the biomorphic texture, which I see as bubbles of air. And when you look at how the material reflects light—both white and black—it’s like water rippling.”

CHOOSING THE RIGHT FOUNDATION COVERAGE FOR YOUR SKIN

ALL YOU NEED TO KNOW ABOUT SKIN PURGING

AN EXCLUSIVE INTERVIEW WITH TIYELSHOP