FEATS AND FOIBLES OF NIKOLA TESLA 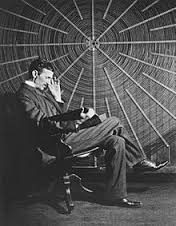 July 10 is Nikola Tesla Day. It’s understandable if you weren’t planning to celebrate. Maybe it’s because you had no idea there was a day to mark the birth of one of the unheralded geniuses of the modern age.
Born in 1856 in Smiljan, part of modern-day Croatia, a young Tesla revealed an unusual capacity for visualization and a turbo-charged mind that could memorize entire books. Already bred for innovation, he received another nudge down that path from his mother, Djuka, who tinkered with her own homemade inventions to help with daily chores.

At the Austrian Polytechnic School at Graz, Tesla became obsessed with the concept of alternating-current (AC) electricity; eventually, he realized its potential as an upgrade over the direct-current (DC) form that powered Thomas Edison’s lighting systems, and he conceived his induction motor as a means for introducing the idea to reality.
After immigrating to the United States in 1884, Tesla went to work for Edison for a spell, before finding investors who gave him room to develop his visions. The most important of these was George Westinghouse, who recognized in Tesla the engine that would allow him to compete with Edison’s DC system for widescale electrical distribution. 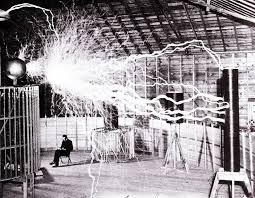 This led to the so-called War of Currents, which featured the mind-boggling spectacle of Edison demonstrating the dangers of AC by electrocuting animals and one convicted murderer. Despite the opposition, the Westinghouse Corporation won the bid to power the 1893 World Columbia Exposition, giving Tesla the platform to dazzle a global audience with the capabilities of AC power.

This was just one in a string of triumphs for Tesla during this period. In 1891 he patented what became known as the Tesla coil, providing a means for generating high-voltage and high-frequency currents. He was instrumental to the design of a hydroelectric power plant at Niagara Falls, dabbled in X-Rays before its official discovery and pioneered the field of robotics through the invention of the remote control. Along the way he engaged in a race with Italy’s Guglielmo Marconi to develop a successful radio apparatus, with Marconi using several of Tesla’s patents for his components. 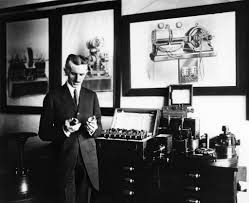 At the height of his powers, Tesla convinced the ultra-wealthy and influential banker J.P. Morgan to finance a wireless communication system that would enable the relay of news, music, stock reports and the like across massive distances. Construction at the Long Island site coined “Wardenclyffe” commenced in 1901, and, as if to symbolize Tesla’s ability to reach to the heavens for inspiration, a 187-foot transmission tower soon loomed over the proceedings.

Sadly, the forces that make the world go round succeeded in dragging Tesla back to Earth. Allegedly strong-armed by Edison backers, the U.S. Patent Office in 1904 overturned its patent for Tesla and awarded Marconi credit for inventing radio. Around this time, Morgan pulled his funding for Tesla’s wireless communication project, transforming the once impressive Wardenclyffe tower into a giant playground for seagulls.
Tesla’s situation wasn’t helped by his reputation of being eccentric. He claimed to have received signals from space and conceived of a way for mankind to alter the weather, which was all par for the course for your friendly mad scientist down the street. Eventually he drew more attention for his obsessive-compulsive and germ-phobic habits, which included the demand for 18 napkins to be placed at his dining table. And this was before he revealed he had fallen in love with a pigeon, which unleashed a stream of light from its eyes as it died in his arms.

The eccentricities tended to overshadow a still highly fertile mind. During World War I, Tesla put forth the idea of transmitting high-frequency radio waves to detect ships at sea, two decades before the first practical radar system was introduced. In 1928, he was issued a patent for a flying apparatus that precluded the invention of the modern vertical take-off and landing machine (VTOL).
In his final years, Tesla was best known for his entertainingly bizarre interviews, and for conceiving a ground-defense system that would beam concentrated particles into the sky to shoot down enemy planes. It became known as his “death ray,” an ironic twist for a war-detesting scientist who envisioned it being used to deter large-scale strife. 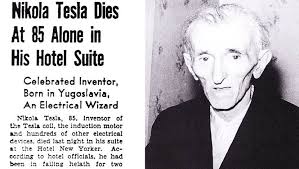 He died in his New York hotel room in 1943, and although the U.S. Supreme Court upheld his original patent for the radio a few months later, the record of his impact mysteriously receded from public memory.
For Tesla fans, the designation of a day to celebrate his achievements represents a pathetic thanks, the equivalent of a “I went to Niagara Falls and all I got was this lousy T-shirt” keepsake. Although his reputation has enjoyed a revival in recent years, it seems this curiosity of a man, always regarded as ahead of his time, is still waiting for the time he receives his proper due.